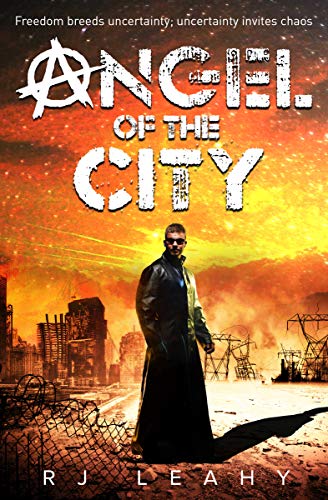 Book: Angel Of The City by R. J. Leahy

about this book: Angel of the City is not your typical dystopian novel. In the first place, it's told in first-person, from the point of view of a brain-damaged, ex-policeman whose name is never mentioned. This wasn't done for artifice. By not giving his name and seeing everything through his eyes, I wanted to convey the sense of overpowering isolation, paranoia and claustrophobia that is life in the City.

The City itself is a character of the book. It is a walled refuge, the last stand of mankind in a slowly poisoned world. Within it's walls are all that is left of our species-- diseased, impoverished and ethnically divided-- all controlled by a totalitarian government trying to hang onto power as the city erupts in violence.

From this festering mass of humanity, comes the Angel, a woman who attempts to bring the various factions together in the hope of improving the life of everyone. When she is captured by the security forces known as Counselors, our man-with-no-name is hired to rescue her. It is a suicide mission and he knows it, but the sins of his past have caught up with him, and he has no choice but to make the attempt.

Angel of the City is a story of the struggle for survival in a hopeless and broken world.