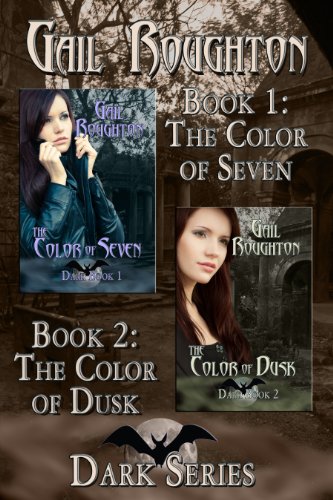 about this book: The publication of the two book Dark Series fulfills a dream in the making for over twenty years. This story and these characters have haunted me that long, yes. The Color of Seven reveals secrets long hidden by the dark. For instance, the dark of a cave back in Stone Creek Swamp harbors a skeleton lying splayed on its floor, rotting stake resting between its rib cage. The dark of a mausoleum in Rose Arbor Cemetery supposedly harbors a man dead for over a century. And it does. During the daylight hours, anyway. An old house built in 1883 sits atop Coleman Hill in Macon, Georgia harboring images of its first master, just waiting to show them to someone. The right someone. Like young attorney Ria Knight. She's the right someone to bring it all together. Who else would know the face of the man she meets by chance one night in a local bookstore, the man who introduces himself as Paul Everett, is shared by the man whose image haunts her house? The man whose name was Dr. Paul Devlin. Who else would even think of mausoleum breaking and entering to track that man to ground? And having found that man, who else would sit and listen to the story that began in 1888 and spanned a century? The story of why a dank cave in the depths of Stone Creek Swamp still holds a splayed skeleton, a rotting stake lying against the rib cage. Or does it?

The Color of Dusk reveals that the dank cave in the depths of Stone Creek Swamp doesn't still hold a splayed skeleton, mostly because a rotting stake isn't still lying against its rib cage. That skeleton's acquired new life. Cain, powerful bokor of black magic, banished to that cave in part by Paul Devlin, is back. Resurrected. Intent on revenge. And with Ria Knight's entry into Paul Devlin's life, revenge looks sweeter all the time. The past, like evil, never dies. It just—waits.

The first drafts of these works were completed in 1993. They've waited patiently in my closet for my writing skills to mature to the level where finally, I feel I've done this story and these characters justice. I hope my readers think so too.