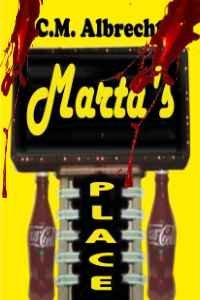 about this book: Young Hal Morrison is pretty much a drifter. Most would consider him a loser. He just takes any menial job that comes along until he tires of it (meaning three or four months to Hal is a long time), and then waits until he's completely broke and desperate before looking for another job.

When Hal is sent to a little café called Marta's Place he expects the same ol' same ol'. It pretty much starts out that way.

Marta herself, chief cook and matron, is a rather dumpy middle-aged woman with legs, as Hal thinks, like a baby elephant. But Marta can be sweet, wears lots of expensive jewelry and she's a hellova cook.

She starts Hal off as a counterman. The present waitress is leaving and Hal quickly finds himself alone out front. Some tough customers in this run-down neighborhood, but Hal gets into the routine and as Marta warms to Hal, she soon lets him count the day's receipts and shows more and more trust in him.

Hal too, enjoys his position and looking about at the drab grey walls and lack of luster, convinces Marta to let him repaint the place in off hours. He does and the result makes a much brighter and more inviting venue. Soon Hal comes up with an idea to advertise a "Freshly ground Chuckburger" to replace just another hamburger, it that takes off.

Having someone around who tends to share Marta's ideas, she begins to dream of moving up to a bigger nicer restaurant...but a lot of that depends on Hal.

How far is Hal willing to go to ensure a successful future? What about his hot, but demanding girl friend? His buddies at a local bar are fun to talk to but not really much help.

And then there's the local drug lord. He seems to have some sort of hold not only on Marta but the entire neighborhood. Somehow, Hal has to learn to get along with this guy if he hopes to stick around.

But when Hal's pregnant girl friend turns up dead, Hal finds himself directly in the gunsights of a couple of determined detectives who see no other viable suspect on the horizon.

Marta's Place from Cambridge Books is a dark novel of deception, ambition, greed, love mixed with lust, and confused desires.

http://writewordsinc.com and amazon.com, nook.com etc. Order your copy today. Marta and Hal will love you for it and I will too!