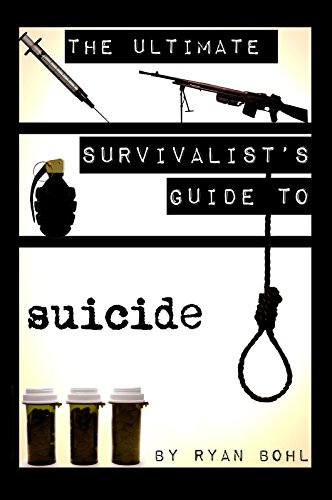 Book: The Ultimate Survivalist's Guide to Suicide by Ryan Bohl

about this book: I was 17 when I tried to kill myself. It was dumb and I was dumb and it remains a deep regret. A few years later, with my life in a rut after graduating college, I thought about repeating history.

This time, however, I went another way. Instead of actively planning a suicide, I decided delve deep into the dark humor that could go along with a How To guidebook for someone looking to speed themselves into the afterlife. That became the book's first chapter.

From there, the book grew. The main character kills himself and is trapped in an eternity of preventing other people from committing suicide. From halting a suicide bomber to saving a drama-wracked high school girl to stopping a school shooter just hours before he grabs his guns, the main character also finds within his tasks a measure of salvation and healing after his own abrupt and ill-advised end.

For a painful subject, the book provides some comedic relief; it provides a window into the thought processes of those who suffer depression, the absurdity of the things that drive people to suicide, and the tragedies that propel some into the darkest places in their lives. It also shows how people get out of those places and become whole again. Along the way, it doesn't take itself too seriously, and does not slide into the realm of sermon and pulpit.

Some of the Amazon.com reviewers have called it "hauntingly hilarious" and "beyond thought provoking." It's certainly one that will give any reader serious food for thought.