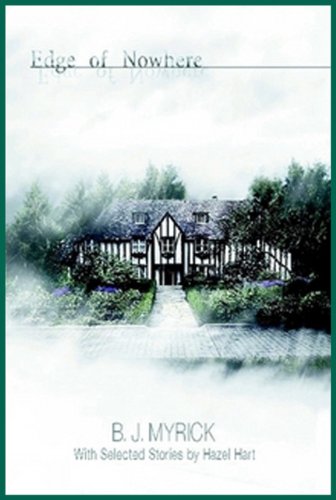 Book: Edge of Nowhere by B.J. Myrick and Hazel Hart

about this book: Edge of Nowhere is a collection of nine tales of dark fiction. The inspiration for the title story came from a local news event when a famous serial killer terrorized Wichita, Kansas for years. Questions crowded through my mind. What caused this man's sadistic, murderous acts: demon possession? What would happen if two sisters bought the house where he lived, only to discover a demonic angel inhabited the house? The story is about two sisters who struggle to survive; one sister resists the possession of her soul as she dances with a demon on the Edge of Nowhere. "Nights are hideous," she says, "It seems I hear the demon whispering in my ear, 'You will remember this night forever. I give you now the timeless gift of love.' " Sometimes when you win, you lose. Discover the demon's "timeless gift" and shiver as this woman triumphs over evil. Or does she?

My other three stories in the collection are "Dark Angel," "A Laugh Like Rolling Stones," and "Deadly Sins." When I wrote, "Dark Angel," I always wondered what happened to the souls of folks who were neither really good nor bad, conjuring up an imagined death of one such person. Then in "A Laugh Like Rolling Stones," my idea answered the question of how far someone might go to climb out of poverty and how fate repeats a cycle of "what goes around comes around"—if a person does something bad, something bad will happen to them—a karma kind of thing. Finally, in "Deadly Sins," the idea came from newspaper accounts I had read in which a religious fanatic considered himself an instrument of the Lord, carrying out His beloved work against sinners . . . and in doing so sinned against the very word of God with his own acts of violence.

I asked my co-writer, Hazel Hart, what triggered the ideas for her stories. On "Cry Wolf," she said, "I put together my tour of a corn maze at Halloween with an imagined werewolf. Then in "A Nice Cup of Tea," I thought of the time I worked in a nursing home and saw many elderly people in pain, so I imagined a group of friends getting together to help out those who needed special treatment. And when I wrote "Confessions," I had often heard of people confessing to crimes they didn't commit. The question I almost always ask when I start a story is why would someone do that? The main character in "Confessions" was at least one answer to that question. As for "L.O.V.E Anonymous," I liked vampire stories before they became popular, and since I had been the member of a twelve-step group, I combined the two interests for this short story. "A Shrill Note," was my reaction to an irritating roommate who left notes for me like, "Don't read the newspaper at the table" when she could have told me in person. Instead of committing an act of violence, I wrote the story.

Together, Hazel and I put our best stories together into a collection we called Edge of Nowhere.