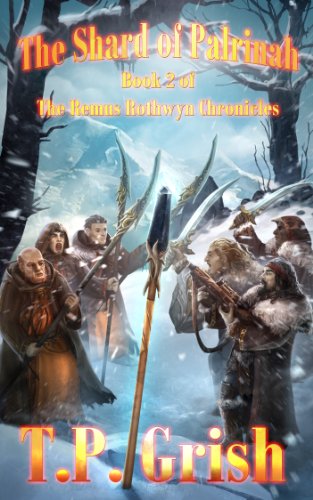 Book: The Shard of Palrinah (Book 2 of The Remus Rothwyn Chronicles) by T.P. Grish

about this book: In the sequel to Steel, Magick and Faith, we see Remus and Elaina reeling from saving High Peaks from a devastating war between Humankind and Fey. In search for adventure, excitement, and the chance to do good, they travel to the city of Yondern, seeking work from familiar factions.

Seemingly friendly factions turn wary, and the most unusual groups present themselves as allies, in the midst of the volatile political conflict between the Steelwielders and Paragonites , which has erupted into open war. Forces both Fey and Human, direct and sinister, are involved in the brewing war, and its potential aftermath.

Perfidian, their old friend, confronts them with troubling information, hinting at an object of power that could wreak devastation upon the land in the hands of the power-hungry. Border settlements between Corsen and Eruthia are at stake, mere pawns in the chess game between the Steelwielders and Paragonites.

The three friends pursue the object of power, and those who seek it, in a deadly game of wits, blades and magick!