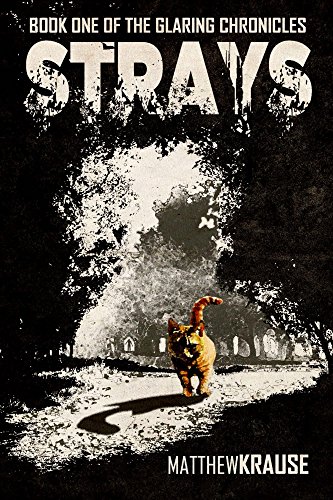 about this book: I have five cats, and like any other cat owner, I often wonder what they’re up to. Each cat has his or her own distinctive personality, and after so many years with them, I have come to think of them not as animals but as people. Strays is a dark fantasy inspired by the question: What if some of the 500 million cats in the world are also people ... would mean that some of the seven billion people in the world are also cats?

In the writing of Strays, I introduced the idea of The Glaring, a tribe of shape-shifting cats that can take on human form at will. I then asked myself just what creatures like this would do, what purpose they would serve. Drawing from the old kitchen plaque adage of “Cats Are Really Angels In Disguise,” I imagined that these creatures would work covertly, sometimes as cats, sometimes as people, to guard and protect the “strays” of the world (so-called "normal" people that lack the ability to shape-shift).

In the narrative, we are introduced to two human “strays”: Sarah, a 15-year-old runaway and victim of horrible childhood abuse; and Kyle, an 18-year-old misfit who deals with his sense of inadequacy by turning to alcohol. While many people might dismiss the these two as human lost souls, The Glaring sees something different in them, something bright and courageous, and they enlist two of their own kind--a ginger warrior named Tom and a dark-haired beauty named Molly--to help Sarah and Kyle overcome the reptiles of their mind and embrace the better angels of their nature.

But our shape-shifting cats have to work fast, because it just so happens that Sarah and Kyle have been called to do battle with Jackal, an ancient evil who for centuries has waged war with The Glaring for the souls of mankind.