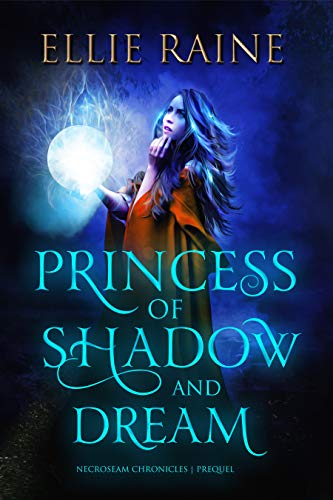 Book: Princess of Shadow and Dream by Ellie Raine

about this book: In the faraway world of Nirus, the five realms of Land, Sky, Ocean, Dream and Death all have an important function to maintain balance in the world. Each realm has royal leaders who are born with magic specific to that realm. In the history of this world, there has never been a union between royal heirs from two different realms…until now.

The Royal Death family's dreams are put in danger when their hired Dreamcatchers go missing, and Prince Serdin suddenly finds himself targeted by dream-stalking demons. Fighting these undead beasts is Serdin's job as a Reaper of Death. But dream-stalking monsters that can destroy your soul is an entirely different matter. Princess Myra has lived in the timeless realm of Dreams for 500 years and is eager to visit the underground kingdom of Grim in the Death realm. When she is asked to protect the Death Prince in his dreams, however, the two royals are surprised to share an unwelcome attraction. Not only is Serdin already engaged, it's discouraged for royal heirs from different realms to marry. And now that the subconscious realm has been infiltrated by the enemy, the two royals must fight their nightmares along with their temptations.

• "Ellie Raine has created an interesting and unique alternate world in Princess of Shadow and Dream... A love story brings two of the characters together, all in preparation for the rest of what promises to be a great series. This is a lovely book for YA and older readers who enjoy fantasy at its best. — Melinda Hills for Readers' Favorite

This dark and enchanting fantasy novella is the prequel to the NecroSeam Chronicles series, a unique and action-packed fantasy of magic, romance, and mystery that will take readers on an adventure they won't soon forget!

Growing up in a family of avid fantasy readers and video-gamers, the Grim Reaper tale has always fascinated me. The NecroSeam Chronicles was originally intended to be a video game. Then I went to the Art Institute of Atlanta to make that dream happen and took a creative writing class from which there was no return.

Don't miss the next three books in the NecroSeam Chronicles: Willow of Ashes (Book 1), Orbs of Azure (Book 2), Pearl of Emerald (Book 3). The fourth book (Phoenix of Scarlet) is coming in Spring 2019.