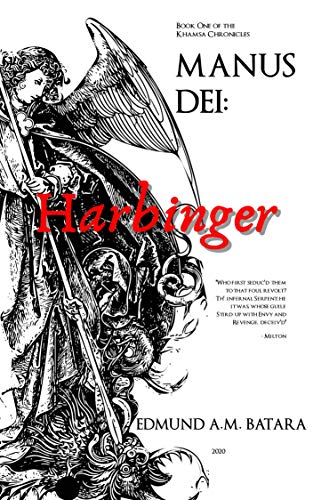 Book: MANUS DEI - Harbinger - Book One of the Khamsa Chronicles by Edmund A. M. Batara

about this book: The end of days is nearing. The great seals are being opened. And the fallen Archangel is coming. With the hosts of Hell at his beck and call. He had been promised dominion over the world. But only for a while. Then damnation for eternity follows.

But the Morningstar has other plans. This time, he does not intend to lose. With enough power, he knows even a divine prophecy can be defied. And Heaven cannot act until the last seal had been broken.

One of them is Keith A. North, SEAL E-6, left for dead in the sandbox. Recruited by the secretive Khamsa, an organization almost as old as recorded history, he learns how to fight against nightmares made real. Limited by rules as ancient as the struggle against Hell.