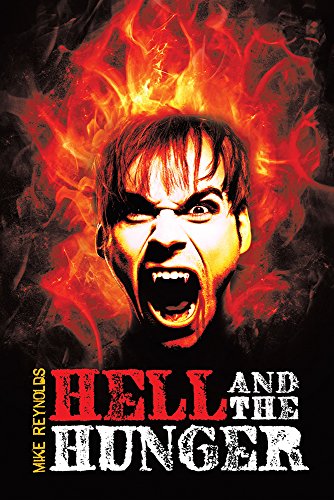 Book: Hell and the Hunger by Mike Reynolds

about this book: On its surface, Hell and the Hunger is a vampire story. As the layers peel away it quickly melts into a dark fantasy with heavy strokes of horror, deep shades of drama, and a bit of humor sprinkled throughout. A vampire who has lost his love of the hunt, a witch with psychic ability that she doesn't understand and can't control, an old priest hiding out in an abandoned old church, a homicide detective on the edge of retirement, and a beast from another dimension find their paths intertwined on a race toward a battle between Heaven and Hell.

Joe is the hunter who has been stalking this planet for tens of thousands of years and he just doesn't want to anymore. His love of the hunt and the humans he feeds on has been slowly slipping away ever since that one perfect man with that one perfect promise proved far smaller than his words. Broken and empty, he feeds only to alleviate the gnawing pain in his gut that will be satisfied with nothing short of fresh blood. When he finds a new promise to believe in, he will fight to the center of Hell and back to protect it.

Evelyn is an enigma even to herself. The daughter of a witch she never knew, Evelyn scours her mother's journals night after night in the store she inherited from her but never finds the answers she seeks. What do the premonitions mean, and why can't she control them? She needs to learn how to control her power before someone else learns how to use it against her.

Father Michael O'Connor is a gaunt, old giant of a man who has taken up residence in an abandoned, old cathedral. When hookers start disappearing in his neighborhood, the police take interest in him and his broken church.

Steve Huft is a homicide detective two short years from an early retirement. Someone has been killing people in his town for nearly a year. He can't leave the force and his storied career without cracking this one case that has him doubting himself like nothing else in his life ever has. When his partner drags him into a seemingly unrelated case of missing hookers, Steve stumbles into a fight between beings from another dimension. Angels and demons are waging war against each other just outside of the city he has sworn to protect.

Before the world is changed forever, each of them will come to question everything they have ever believed. What is wrong, what is right, and do either of these concepts even exist? There are no absolutes. There is no good. There is no evil. There is only intent.

Video: Hell and the Hunger by Mike Reynolds