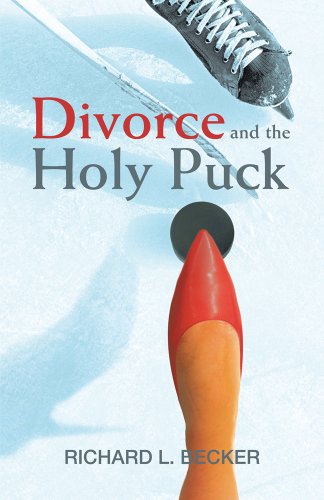 Book: Divorce and the Holy Puck by Richard L. Becker

about this book: Have you known spouses involved in a bitter divorce, or parents with a child on a competitive youth sports team?

I’ve practiced divorce law since 1994 and coached competitive youth sports teams since 1990. Both divorces and coaching lead to serious heartaches, but they also are fertile grounds for comedic fiction.

My protagonist, Sam, is a lonely divorce lawyer who is drifting thru life, making little effort to control his own fate. And then into his office comes Rebecca, the woman of his dreams, a lovely siren seeking a divorce and believing her son will be the greatest hockey player ever.

A dark comedy, my novel gives the reader an inside look at divorces from a lawyer’s perspective, as Sam deals with such clients as the wife of an NFL quarterback and a powerful corporate executive.

This novel also features Sam’s struggles with hockey moms and dads, who believe their children will be a professional athletes, and his dealings with opposing coaches who view each game as a war that must be won.

The divorces are outrageous, the youth sports dilemmas are absurd and yet seemingly all-too-true, and together they lead to a dark comedic narrative in which anything can happen, and usually does.

I hope this novel brings laughs, and lets you look at these disparate worlds in a new light.