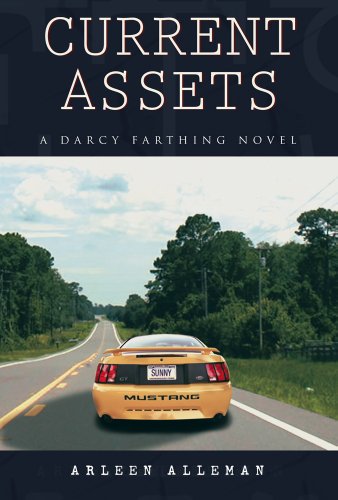 about this book: Current Assets is the third Darcy Farthing adventure. This story differs somewhat from the previous two novels, in that most of the story takes place on land in South Florida rather than on a cruise ship. Mick's work as a manager for the Government Accountability Office and his quirky staff, once again play a big role in solving crimes. I hope Darcy followers will like this story as much if not more than the previous ones. Those who are interested in the relationship aspect will like finding out how Darcy and Mick's affair resolves.

In this installment, Darcy is living in Marco Island, Florida with her boyfriend and GAO manager, Mick Clayton. Her restful stay on the beautiful island canal abruptly turns disturbing and violent when daughter, Rachael shows up unannounced with serious problems Darcy and Mick are ill-equipped to handle at the same time their friend and compatriot, Tom Smythe is jailed for shooting a sheriff's deputy.

As Darcy and Mick try to clear Tom's name and help identify a vicious murderer, they find themselves on the sea again and in danger on a mega-million dollar private yacht, owned by a Yemeni terrorist, using South Florida and the asset forfeitures as a cover to smuggle and launder funds from the sale of ancient artifacts from South America.

Once again, in Current Assets, the combination of murder, mystery, and intrigue, with exotic travel, and family dilemmas provides something for everyone.