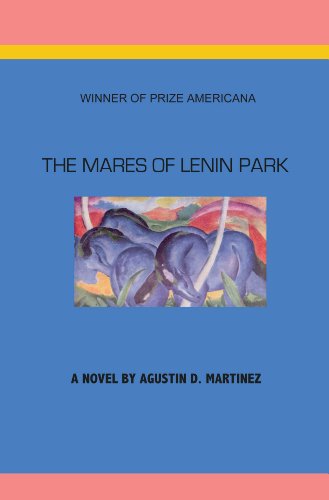 Book Reviews: The Mares of Lenin Park by Agustin Martinez

about this book: The book is about a 14-year-old boy, Uli, living in Cuba in the early '90s when Cuba experienced great economic challenges due to the fall of the Soviet Union. Uli struggles with his identity of becoming less and less patriotic while trying to remain true to the memory of his missing father who supposedly died in Angola and was now revered as a State hero. After his mother remarries, Uli relies on Nestor, his cousin and best friend, to continue living life as best they can. Their mischievous nature causes them to discover certain things about the country they live in, including stumbling upon members of the Omega Underground Movement. What they discover turns their lives upside down and catapults them to an unexpected journey where they must stay quiet to survive.

My parents fled Cuba in the early '60s. Having grown up in Miami, where stories about life on the island were commonplace, I drew from those experiences to write my novel. Although this is a work of fiction, I drew upon the real details of living life in a post-revolution Cuba to include citizens who live on ration cards, teenagers who must work in "voluntary" work camps, and neighbors who spy on one another for the State. The appeal of this YA/Crossover novel is universal in that it depicts the struggle to maintain one's identity while surviving in an ever-changing world. Alan Davis, author of 'So Bravely Vegetative' and 'Alone with the Owl,' writes "This is a rambunctious debut; Martinez is a writer to conjure with."

My emotions ran the gamut as I read this book. I laughed, cried, became nervous, experienced sadness, was terrified... The writer held me "captive" from the beginning to the end with his vivid imagery, precise language, and bold truths. Sequel! Sequel! [by Audra Sydnor]

I read the book in one day! Absolutely loved it. The action-filled plot and Martinez's beautifully crafted prose just made me keep reading. I hope there's a sequel! [by L. Noda]

Took Me Back Home

As I read Mares, I couldn't help but become nostalgic about the Cuba I left behind! Uli's struggle as he becomes more and more dissatisfied with the realities of communism is something I can relate to. [by Irene Alberto]

True literary fiction! From his wry wit to his use of lyrical language, the author knows how to engage a reader. I laughed one minute and sat on the edge of my seat the next waiting to see what would happen to Uli and his family. Bravo! [by George Figueroa]

It is clear that Martinez will go far with his writing. Having been born in Cuba and having family who is still living in Cuba, the author is spot on with the details and challenges he presents in his novel. Although this is a work of fiction, the author did his homework regarding what life in Cuba is like today. His use of Spanish peppered through the dialogue and prose made me feel like I was right there in the action. Martinez has a great ear for dialogue! I look forward to reading more of the author's work in the future. [by Millie Baker]

Mares is a winner

It is clear why Martinez won Prize Americana for Prose 2012. From the moment you start reading The Mares of Lenin Park, you fall in love with its protagonist, Uli. Although this book may appeal to a young adult audience because of Uli's coming-of-age story, it will greatly appeal to adults as well. I am a Cuban-American living in Miami and was so attached to Martinez's imagery and themes depicting what so many of us exiles have experienced. The author's voice is realistic and captivating from beginning to end. It left me wanting to know more about what happens to Uli and to his family. A true masterpiece! [by Jane Ginart]