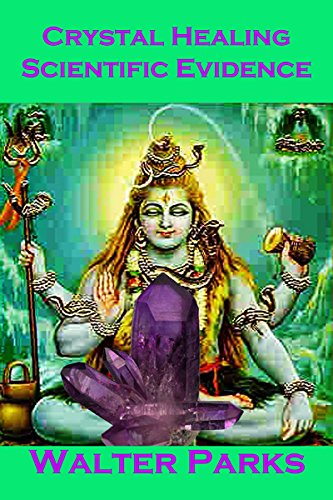 about this book: I found the scientific mechanism that allows our body's energy field to receive transmission from a radiating crystal. Crystal Healing is not the quackery I had been lead to believe.

The Third Eye of our ancient per-human ancestors has evolved to become our pineal gland and it is still capable of receiving external vibrations including the soothing frequencies of certain crystals.

I was inspired to write this book because of the insistence of my friend who was a dedicated believer of Crystal Healing.

I began by reading the Vedas of the ancient Hindu Religion and learned their beliefs regarding charkas and especially the charka they call the Third Eye.

I chose a picture of Shiva from the ancient Hindus and surrounded Him by crystals for my cover.

The hardest part of writing this book was my initial belief that Crystal Healing was quackery. My career has been in Aerospace Engineering so it was very hard for me to even consider such a possibility as Crystal Healing.

I evaluated several types of crystals and found that the amethyst crystal had the best measurable energy field with the most available data.

I knew from Einstein's famous equation E=MC2 that our bodies are basically two kinds of matrices: one of matter (M) which is our flesh and bone, and one of energy (E) which has a measurable electromagnetic field. (C is the speed of light.) I knew that advocates of Crystal Healing called this field our aura.

The basic objective was then to find a mechanism that could enable our bodies to receive an energy transmission from a radiating crystal.

I investigated this Third Eye and learned that our ancient ancestors did indeed have a Third Eye that could sense vibrations from their environment. Some primitive creatures still living today have Third Eyes.

I found the possible scientific basis for Crystal Healing and I describe my research and finding in a step-by-step fashion in this book.