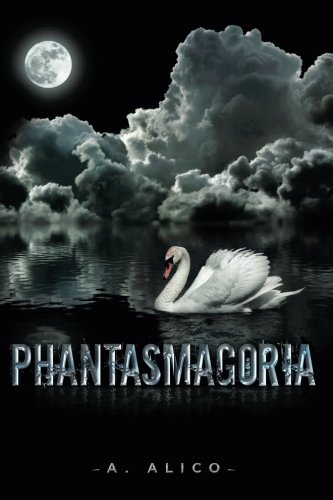 Book: Phantasmagoria by A. Alico

about this book: Roberto spent his childhood in a cramped studio apartment with his father Lalo and mother Yidera. After years of hard work in the construction industry, Lalo has finally earned enough for a bigger home for his family. On a hot day in early summer, they pack up their belongings and move across Queens to a new house, where Roberto will finally be able to have his own room. Lalo sings with excitement, and Roberto is overjoyed. Yidera is just happy to see her family smiling.

When they arrive, Roberto quickly makes friends with some local kids who are kicking a soccer ball around. They introduce him to their other friends, and Roberto spends the summer growing closer to this group and finally feeling like he has a place where he belongs.  Unfortunately, his new friends are not here to stay. As soon as the summer comes to an end, everyone has somewhere else they have to be. They don't even end up in the same school.

Frustrated and lonely, Roberto hesitantly enters school. He is not welcomed as warmly as he was to his new neighborhood; instead, he is soundly ignored by kids and teachers alike. The only one who will speak to him is a rough-and-tumble kid named Gasper, whom Roberto is forced to work with on a science project. Gasper is always cracking jokes and getting into some sort of trouble. But beggars can't be choosers, so Roberto indulges in the friendship. However Him and Roberto find themselves getting into trouble at school. Gasper is kicked out of school, and Roberto is alone once again.

To make matters worse, Roberto finds that his neighborhood is not as nice as he and his family had thought. His isolation makes him a prime target, and Roberto is mugged on the way home from school. Roberto returns home shaken, feeling alone and confused. For protection, he grabs a knife from his kitchen to ward off future attacks.

The next time he is approached by the same local thugs, Roberto pulls out the knife, hoping to scare them off. Chaos explodes: the next thing he knows, one of his attackers is on the ground and all he can see is blood. Panic sets in, but before Roberto can react, the calming voices of two men talk him through the disaster. They help him flee the scene, letting him hide out in their home and covering for him with the police. Roberto discovers that they are Byron and Jake, his neighbors: the mysterious, motorcycle-riding figures he has only ever seen out at night.

Byron and Jake help Roberto calm down and clean himself up, and they invite him to come back the next day. Roberto has no idea why these reclusive men have decided to help him, but his desperation and loneliness lead him to accept them as friends. But everything has a price attached to it. In this know part of the neighborhood if someone scratches your back you better be ready they are going to expect you to return the favor and scratch theirs. Roberto is not the innocent boy he was once was. He begins to develop a relationship with Byron and Jake. Soon he is at their house every day, skipping school and lying to his parents.

Byron himself is a riddle. He talks to Roberto in a subliminal way, every sentence has a hidden message. Jake is Byron's brother who is cautious with Roberto. He follows his brother Byron's lead. Roberto feels in debt to them for helping him with his secret. The more time Roberto spends with them the deeper he finds himself in the darkness. Byron and Jake introduce Roberto into a different life. They have no conscience or self-moral. They are corrupt powerful men. Jake finds himself becoming more like them every day. No matter how much he fights the darkness the light gets harder to come in.

Roberto's comfortable routine with Byron and Jake shatters when his parents find the gun they gave him hidden under his bed. Horrified, his parents beg him to give up this dangerous lifestyle and vow to return their family to the happy unit they once were. Roberto reconciles with them and feels a fog lift in his mind for the first time in ages—he agrees to quit seeing Byron and Jake. But the next day when he goes to tell them, Byron's poetic words convince Roberto that his place is with them. To cement his loyalty, they ask him to join them in a job: a bank robbery, where the score will set them up for life.

Roberto hesitantly agrees, but his loyalty was never in question. Byron and Jake have set him up to take the fall, and attempt to murder him inside the bank vault. Roberto manages to escape and hide the money, but he is arrested shortly after when officers arrive at his house to question him about the death of a mugger on the street outside Byron's house. Byron has

In prison, the narration describes the long hours of loneliness and agony, the boredom and the anger at his situation. But something seems off. Gradually it becomes clear that the narrator is not Roberto, but Jake, who is in a psychiatric ward following Byron's death. Jake is convinced that Roberto has murdered his brother, but a conversation with the nurses suggests that Byron died in a gas explosion, and Roberto was merely a passerby who witnessed the tragedy. In the end, it is left to the reader to decide what is real and what is merely phantasmagoria.