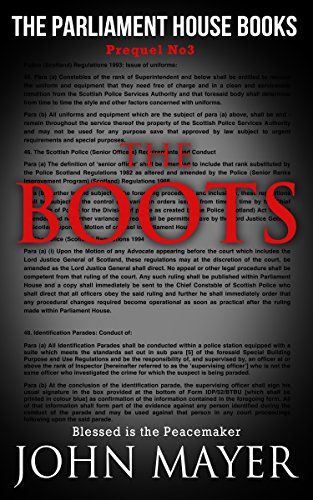 Book: The Boots - The third prequel in The Parliament House Books series by John Mayer

about this book: Third prequel to the Parliament House Books series. Newly qualified Advocate Brogan McLane is thrilled to get his first client ... unlike the client, a senior police officer who is at risk of losing his career over a technicality. Themes of justice and injustice, honest police officers and violent criminals. Who needs protecting and from whom ? Will Brogan McLane work out who and how ? Great for anyone who enjoys Crime, Legal, Police stories, and of course anyone wanting to get to know crusading Advocate Brogan McLane a little better. More tales of Low Life in High Places in the Old Town of Edinburgh.

SPICEWALKER on AMAZON awarded The BOOTS 4.5* This is the third prequel (to the Parliament House Books series) and Brogan McLane's first solo case since being called to the bar. The newest of the Advocates in Parliament House, traditionally known as 'The Boots', Brogan is handed a tribunal case, one which is seems the panel has already decided the outcome of. It is therefore up to Brogan to find a way to successfully defend his client, Detective Inspector Terry Imrie.

What I really do like about this book, and the main full length novel, is the attention to detail that John Mayer captures about Parliament House and the whole tradition of the Advocates. Clearly he has been through this himself so would know better than most, but really makes it live on the page and it makes a refreshing change to see the other side of the justice system.

In this book we see the makings of Brogan McLane, of his reasoned arguments and the kind of resolve, if a little rough and ready at this point, that will make him such a formidable and to some, threatening opponent in future years. Yes he has all the exuberance of a novice, and makes mistakes to boot, but you cannot question his intelligence or his commitment and passion to his job. It is a little heavy on the legal speak, but not inaccessible and is a great precursor to characters and setting in the main novel, The Trial.

ALSO AVAILABLE AS PART OF THE BOX SET All Three Prequels also available on Amazon.