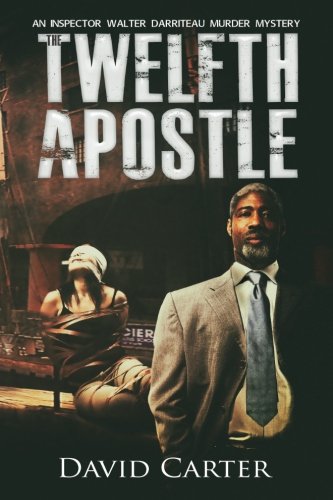 about this book: The latest Inspector Walter Darriteau crime thriller "The Twelfth Apostle" sees Walter and his team dragged into the filthy world of modern day slavery and human trafficking, though Walter has no idea about that as the case begins.

Sergeant Karen Greenwood is invited to a moneymaking scheme being promoted at a top city hotel, something that her boss would run a million miles from.

With Walter alone in the office he receives a phone call from a long ago superior from Scotland Yard. He needs a big favour, and he needs it bad.

Meanwhile a young man supporting aging parents running a smallholding on the outskirts of the city vanishes for no apparent reason. His mother and father are frantic with worry for he has never gone missing before.

And then one night the body of an Oriental young woman is unceremoniously dumped outside the city swimming baths, but who is she and who is responsible? No one reports her missing and she is not known to the police.

Four apparently random events, but four strands of enquiry that lead Walter and his team to places they have never visited before.

"The Twelfth Apostle" is a big read, 500 pages, and this is what the writer S A Rivers had to say about it:

I don't usually read crime/thrillers but I do like a good gripping plot and really believable characters. This book has both and I was particularly impressed by the details of place from Hong Kong to Liverpool - the writer definitely knows England's northwest inside out. Inspector Walter Darriteau manages to be hardworking, clever and endearingly human, much better than a lot of TV detectives I've seen. Also, it's a good, long read - one to get into on dark winter nights.

"The Twelfth Apostle" is out now in paperback and as an Ebook on most well known platforms.

You can read much more about it on David Carter's website at www.davidcarterbooks.co.uk