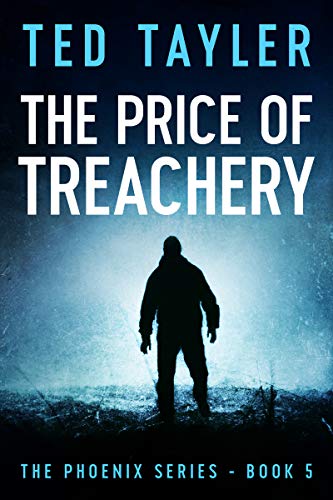 Book: The Price Of Treachery - The Phoenix Series Book 5 by Ted Tayler

about this book: I think of myself as a storyteller; I hope that with each successive book I get better at it. What I've been told is that the reader feels as if we're sat across the table from one another over a drink, and I'm just chatting with them.

As for the thriller series featuring The Phoenix; well, life is all about balance isn't it? Good and evil, love and loss, laughter and tears. The Phoenix believes that criminals should pay for their crimes; the system often fails to deliver the correct punishment. The Olympus agents can help him redress the balance. There are stories left to tell

The fifth book in the series continues the fast-paced story as two factions vie for superiority within the Olympus Project. The Olympians and the Titans are in a power struggle.

Every story includes an element of current political or economic issues. They could truly be said to have come from tomorrow's headlines.In this book there are scores to be settled with unscrupulous landlords in London; a traitor inside Larcombe Manor to be uncovered. There is a new life to protect as Athena prepares to become a mother.

The Phoenix needs all his wits about him and all of his skills to keep his colleagues and loved ones safe. If the final battle is lost, the Titans will take the organisation into a darker direction altogether. Their ultimate aim is to overthrow democracy in the UK. Who will win the day? The action never slows… the tension never slackens.

Video 1: The Price Of Treachery by Ted Tayler
Video 2: The Phoenix Series