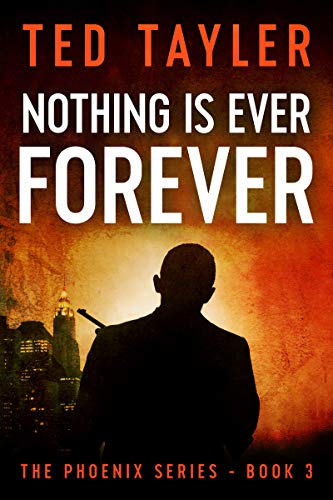 Book: Nothing Is Ever Forever (The Phoenix Book 3) by Ted Tayler

about this book: 'Nothing Is Ever Forever' the third book in The Phoenix series shows a departure from the format of the first two books. When I started this was meant to be a trilogy! However, the stories keep coming and the interest in the books is growing. It would be silly to stop now. We pick up the story immediately after the 2012 Olympics, with Olympus agents dealing with criminals in inventive ways; nothing new there I suppose?

A couple of old faces reappear as we catch up with police officers Phil Hounsell and Zara Wheeler to discover what happened to them after those final scenes in 'Unfinished Business'; the book that preceded this series. There were always loose ends to follow on from that book and if the series is to be extended to five or even ten books, I need more characters and potential story-lines.

There are plenty of twists and turns and the excitement level in the action never dips, whether it's during the Somerset floods or the Diamond Jubilee celebrations. There's love gained and love lost; lives saved and lives lost. Each turning page brings another shock.

The day draws ever nearer when Erebus, the figurehead of the Olympus Project is to retire. With the 'elderly gentleman' leaving Larcombe Manor, this puts Athena and The Phoenix firmly in charge. Who are the mysterious financial backers for The Olympus Project? How many possible stories will revealing their identities throw into the mix?

A 'taster' chapter from Book #4 'In The Lap Of The Gods' is at the end of this book. Where will the story go next; and who will be there to be a part of it? You need to read 'Nothing Is Ever Forever' to find out.