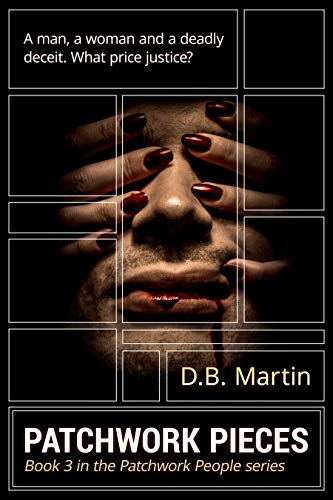 about this book: Patchwork Pieces is the conclusion to the compelling Patchwork People suspense trilogy, the first of which is the winner of an Indie B.R.A.G. Medallion.

When Lawrence Juste QC, gentleman and liar, originally championed the case of the boy who reminded him of himself, he couldn't have known precisely how much like him the boy would turn out to be. Or that the boy's past was already as entangled in murder and betrayal as his own; the same murder and betrayal…

In facing his past and his failings, Lawrence Juste comes uneasily to a new understanding of himself and the importance of loyalty, love and the principles he thought he'd lost. Now the wheel has turned full circle. The past is the present, the betrayed are the betrayers and only the ultimate sacrifice and maybe an unusual form of natural justice can save both Juste and the boy. The only question ultimately remaining, as the patchwork completes:

Who will be sacrificed?

• "Twisty, twisty…love the characters, love the detail, love the unusual progress towards justice."

The hardest part of writing the trilogy was keeping track of all the characters and how they fitted into both Lawrence's past and present, and also knowing where to end and begin each book. Each book in the trilogy had to be a complete story in itself, but with the reader knowing there was more to come – the final resolution. However, I so enjoyed writing a trilogy – and learnt so much about plotting and story arcs, that I'll definitely write another. I planned the conclusion completely differently originally but Lawrence and the situation took over until eventually there was only one way I could see it ending – a perfect example of the characters telling the author what to do. And being awarded the Indie B.R.A.G. Medallion for Patchwork Man was absolutely wonderful. The trilogy is now complete with Patchwork Pieces concluding the series in a truly unexpected way – according to reviewers!