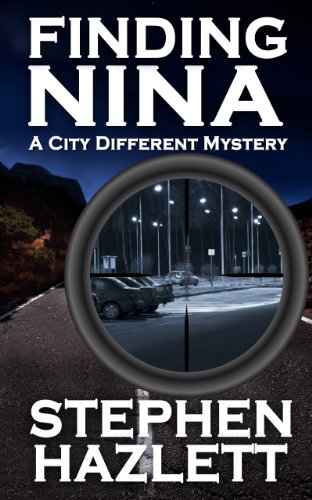 about this book: After writing volumes one and two of The City Different Series, I thought my work was done. But I realized that the ongoing story of Nina Kelly was not complete. Many readers asked," What happens next in her life?" They wanted more. I had to bring Nina's story to its logical conclusion, which I did by writing Finding Nina, volume three of the series. As in volumes one and two, it is set in Santa Fe, NM. And while the earlier volumes were straight mysteries, Finding Nina is both a mystery and a crime novel.

A question potential readers sometimes ask is, "Do I have to read the series in sequence, starting with volume one?" The answer is no. While the narrative is connected through all three volumes, each book stands on its own as a complete story.

The title of Finding Nina, the last chapter in Nina's story, is a reference to her becoming lost, in more ways than one. Finding her, then, is the main arc of the story, told from three different points of view:

• Nina: She is thirty-six, with a feeling that her life is passing her by. Her six-year romance with Santa Fe Detective Ray Sanchez is over. Her problem? She still loves Ray, but she can no longer like him. She has drifted into a marriage to a wealthy Santa Fe businessman, who deals in gold and silver coins, some rare and expensive.

• Ray Sanchez: Ray's life hit the skids after Nina ended their six-year live-in affair. Kicked off the Santa Fe police force after two drunk driving incidents, he must serve a brief stretch in county detention. All of this for the lack of Nina, his lost love.

• Sammy Garza: A small-time burglar who meets Ray in county lockup. Garza knew Nina years ago and never stopped obsessing over her, though she wouldn't give him the time of day.

Sanchez and Garza share little in common, except for their passion for Nina. After both men are released from jail, Garza hatches a plot that involves Nina and her wealthy husband's money. Ray is unsuccessful in stopping Garza, and Nina, who is in the middle, goes missing. Garza has Nina, with plans for a rich getaway, but he doesn't have her in the way he really wants. Ray's goal is to find her before it is too late, and, in the process, win her back. All of this turns into a deadly rivalry between the two men, resulting in an ending that will surprise.

• In Finding Nina, Stephen Hazlett presents a book that has a definite Elmore Leonard feel to it. The writing is sparse and straightforward, the characters are normal people who make bad choices and find themselves in bad situations.
— Anniki – LibrayThing Reviewer, Australia

• The charmed yet complicated life of Nina continues with a dangerous adventure through the seedier side of the City Different. The dialogue is quick, funny and at times poignant.
— DaveG – Independent reviewer, Hawaii

• Stephen Hazlett's book is filled with a world of three-dimensional characters, flawed and nail-tough, petty and smart and sometimes damn funny. If you like good scenes, snappy dialogue, and wondering where the hell the author is taking you, you will like "Finding Nina."
— Dennis Kastendiek – Writer and reviewer, New Mexico

• Stephen Hazlett has done it again with the finale of the "City Different" series. He has written a compelling tale of consequences for bad choices. Certainly a good choice for fans of the two previous Santa Fe mysteries.
— Anne T "syncopated gaited" – Independent reviewer, New Jersey