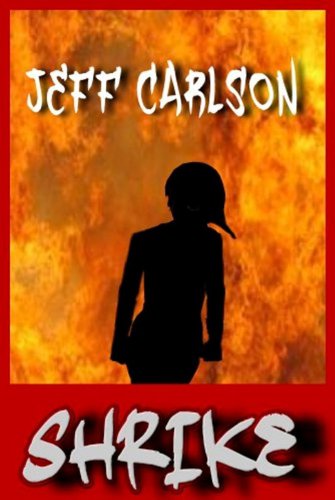 about this book: Shrike is the story of how one young woman rises from the ashes of personal tragedy to wreak vengeance on those who engineered the tragedy. I had the idea in me for more than three decades and meeting a young lady with visions such as mine inspired me to start writing it in October 2006. I finished it in June 2009. So far, my primary readers have been women.

A shrike is a bird that impales its prey. Why my book has such a title is described in great detail in the text. The cover of the e-book was chosen as it shows my character in the shadow of the flames that transformed her. The cover of the print version contains the colors of fire.

The hardest part of writing the book was finishing it. An upheaval in my personal life almost killed the book but I pressed on and completed it. I had to research police work and the treatment of burn patients to make the book as accurate as possible.

My greatest lesson learned from writing Shrike was that it is impossible to get an agent to represent new authors. If it weren't for e-publishing and print-on-demand, this book may not have even received the limited exposure it has had. All I ask of readers is to give Shrike a look. It is an inspiring story that will move you and it will make one incredible film.

I read SHRIKE when the author first published and enjoyed everything about it. The main character is well developed as is the supporting cast. The story twists and turns through the beautifully described settings. I am a scifi/fantasy geek in my reading and writing choices but could not put the book down once I started reading.

If you want a fast paced read, let SHRIKE take you on a wild ride through Taryn's life.

Great book, kept my interest. Jeff writes with feminine qualities, just like he knows how a woman would feel in the circumstances. He explains how Tayrn looks in detail, easy to feel as though you're part of the book. I helped with the cover, Jeff had me start with a female image and work through that to put her in costume . With me knowing just how beautiful she was to start with, and how throughout the story plan had destroyed her beauty, he explained it all in detail, so starting with an image with her, I figured I had an upper hand in her looks, but this was created and explained well throughout the story. One then begins to see the reason for the cover.

It captivates you in such a way that it's hard to get it out of mind when the book is down, it's just there. You begin to have feelings for her and her best friend, then her friends family members. When I finished the story, I wanted more. [by Judy Smith]