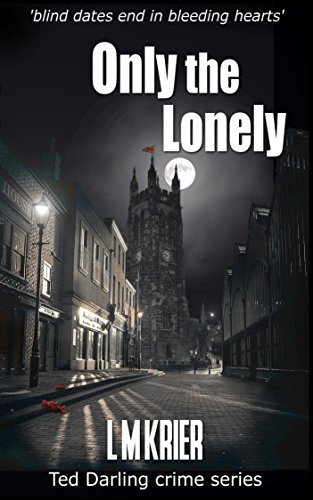 about this book: What readers say about Only the Lonely

• 'another humdinger of a crime novel!'

• 'a great read, hard to put down and the plot was excellent'

• 'at last a copper who isn't a chain smoking alcoholic - he is gay, tiny in stature, has a black belt in four martial arts and is caring - too much for his own sanity sometimes'

• 'another clever plot, with crisp gripping writing, another page turner'

Ted Darling crime books are set in Stockport, UK. For this cover I selected a photo of its marketplace and St Mary's Church, a local landmark – L M Krier

Ted Darling is back at work with a promotion, an expanded area to police, and a bigger team to manage.

Before he's even had chance to catch his breath he's facing his first murder in what could be the most cynical case he's ever encountered.

The corpse count rises with a separate case developing. A savage killer appears to be selecting victims from online dating sites and dispatching them in vicious, frenzied attacks. Seemingly innocent no-string blind dates ending in bleeding hearts – and dead bodies.

With potentially two serial killers at work, Ted has plenty to deal with. But then he discovers that not all coppers work like he and his team do. Some of them just want to see someone behind bars, and aren't too fussy if they are guilty or not.

Can Ted get the new team members singing off the same page to bring in the killers before there are more victims?