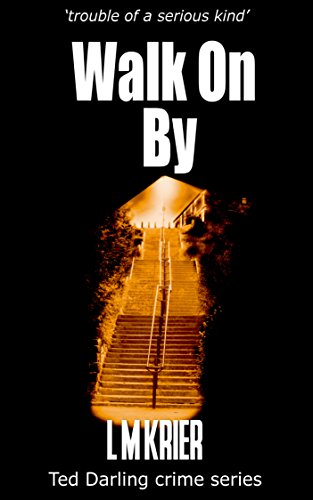 about this book: What readers said about Walk On By – 4.9 out of 5 stars average

• 'more believable cases for our unlikely hero and a cliffhanger ending that turns this from mere pleasure into a serious addiction. I can't wait for my next fix'

• 'a terrific read, well written, a good story with intrigue, one or two heart stopping moments and even some humour'

• 'absolutely brilliant and impossible to put down'

Like all the books in the Ted Darling series, this one features a real cover shot of an iconic local landmark, in this case, steps leading out of Hollywood Park, Stockport (UK) – L M Krier

Ted Darling's Big Boss is out of action. The two of them get on well, bounce ideas around and are best friends outside work. Now Ted finds himself involved with a big and complex operation and a nightmare scenario. Overseeing it all is a senior officer with a serious grudge against Ted. One who'd stop at nothing to take him down.

Then another face from the past turns up, needing Ted's help. One whose presence can only mean trouble of a serious kind.

Ted's spinning a lot of plates and heading for a dangerous encounter. Will his Specialist Firearms Officer training and martial arts skills keep him safe?