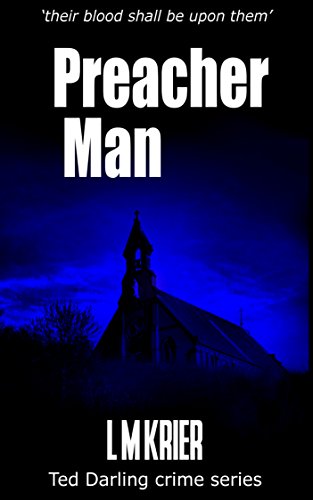 Book: Preacher Man - 'their blood shall be upon them' (Ted Darling crime series Book 9) by L M Krier

about this book: What readers say about Preacher Man:

• 'a great achievement to be able to describe such horrific events while limiting the grisly gory detail so the reader, while appalled, is not terrified. No sensationalism for the sake of it here'

• 'a roller coaster ride with some gasp aloud moments, I read it in a day, really didn't want to either put it down or for it to end'

• 'well researched and plotted with characters with depth and personality'

The briefs I give my poor cover designer, DMR Creative, are sketchy to say the least. 'Find me a redundant church in Greater Manchester (UK) and make it look spooky,' I said. I think he succeeded, don't you? - L M Krier

Ted Darling is Senior Investigating Officer when a teenager is found naked and wandering in a lane. He can't answer any questions about the serious injuries he's sustained, only repeatedly recite a biblical passage. 'And their blood shall be upon them'.

Ted and his team discover he's been missing for six months – and he's not the only young person to have suffered the same fate.

Ted oversees the enquiry, as SIO. But at the same time he's tied up with an important court case. One where the father of the young defendant seems prepared to stop at nothing to bring the case crashing down around him.

Things get worse for Ted when he's told his close-knit team must lose a member. And he has to choose who it will be.

Whoever the kidnapper is, he seems to have a set timetable for his abductions. Can Ted catch him before he strikes again?