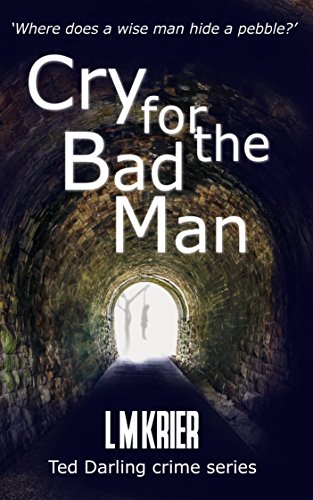 Book: Cry for the Bad Man - where does a wise man hide a pebble? (Ted Darling crime series Book 10) by L M Krier

about this book: What readers say about Cry for the Bad Man

• 'Ted Darling...if I ever get murdered I want him on the case! Another sensational book, full of twists and turns and packed with brilliant characters'

• 'Krier's work is always meticulously researched and this book is no exception. Realistic, gritty and contemporary'

• 'this new book does not disappoint ... there are so many suspects and just when you think you have solved the story takes an unexpected twist!'

• 'I was disappointed in the ending of this one, but that is a personal preference and nothing can disguise the true craftsmanship of this writer or the intricacies of her plots. You feel Ted and the team's frustration in this case'

There's a place not far from Stockport (UK), where I grew up, where I went fishing a time or time with my brother, uncle and cousin. It has this scary tunnel which was just crying out to be featured on the cover of a locally-based crime thriller – L M Krier

Ted Darling is surprised at a question from Home Office Pathologist Professor Nelson, during a post mortem - 'Where does a wise man hide a pebble?'

It's not a case Ted was expecting to get for him and his team. The tragic but seemingly straightforward suicide of a young man. But it's a case where nothing is quite as it seems.

There's no shortage of potential suspects. The trouble is, they all alibi one another. An unexpected change in Ted's senior ranking officer isn't helping and the case seems to be going nowhere.

Matters are made worse with a phone call from the Infirmary summoning Ted to the bedside of a dying man.

Ted's detection track record has always been excellent. But could this enquiry prove to be his nemesis? The one that got away?