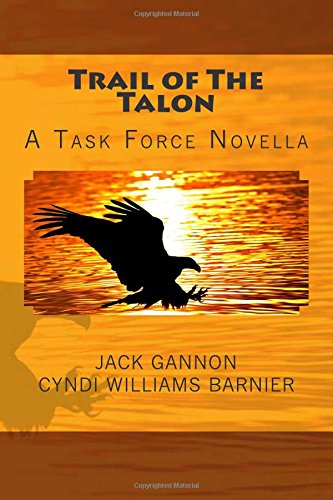 about this book: As writers, we decided to take a different approach to writing a book "series." Our origin book / first novel we wrote was MURDER IN TWOS AND THREES. A psychological / suspense / thriller... depicting a specialized federal task force established to target criminals that other law enforcement agencies can't catch. We began by focusing on a fictional serial killer. Our origin book sets the stage for the establishment of the Task Force, introduces all the characters, shows the first serial killer, it takes you through twists & turns throughout the entire book (hopefully leaving the reader exhausted and wanting more to read!)(And thankfully its still holding its 5-star rating on Amazon!) So with that in mind, we decided to write a novella as the second book in the series - a shorter, more compact read focusing on one or two Task Force characters only... following them through a particular mission. The novella lets the reader "get to know" the character better, on a one-on-one basis. This helps to make the persona of the character even stronger in upcoming novels.

So with that, we created TRAIL OF THE TALON. This book focuses on Task Force Agent Seeker (former military man with specialized training, a millionaire (via family ties)... but he seeks out adventure and crime-solving despite that fact that he doesn't require a paycheck! We happily gave him a refurbished, customized aircraft to live in (his home in the sky)... and his address changes depending on which mission he's on. "Talon" is on the Most-Wanted-List, an international extortionist, kidnapper... a man for hire for just about any job. Don't be surprised if you find him popping up any many of our other books.

Characters like Agent Seeker have a tendency to begin telling the writer what to write! Somehow we went from simply writing a story to actually "listening" to our characters... typing what THEY wanted to convey.

Here's the story-line for TRAIL OF THE TALON: Task Force Agent "Seeker" and his on-again/off-again girlfriend FBI Special Agent Stephanie Anderson have their vacation interrupted to save a kidnapped girl, only to find themselves in pursuit of the elusive international extortionist known as The Talon. Can they survive his death traps and get to Buenos Aires in time to stop The Talon before his master plan is complete? "Trail of The Talon" is the second adventure in the TASK FORCE series by the authors, and features characters from their first novel "Murder In Twos and Threes".

There's many more TASK FORCE NOVELS in the works: THE LATRODECTUS MURDERS, TRAIL OF THE HUNTER, MURDER BY EXECUTIVE ORDER, and more.