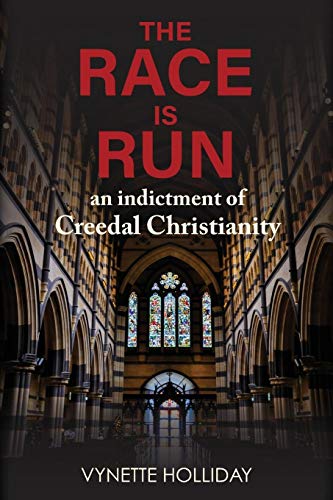 Book: The Race is Run - An Indictment of Creedal Christianity by Vynette K Holliday

about this book: This word demonstrates conclusively that the core teachings of the major denominations of Christianity such as the Virgin Conception/Birth, the Incarnation and the Trinity are not based on either the Hebrew Scriptures or the New Testament but rather are drawn from the Hellenist-Latin theologies and philosophies of the Church Fathers as expressed in the Christian Creeds formulated and formalised through the medium of the Ecumenical Councils convened between the years 325 AD and 451 AD.

Ignorance of Israelite thought, concepts, cultural norms and literary styles, together with the Fathers' existing predilections, facilitated the creation of the cult-like figure "Jesus Christ" fashioned according to their image and their values.

This work also demonstrates that the Christian teaching of Supersessionism contributed to the centuries of Jewish persecution which ultimately led to the Holocaust. Responsibility for this descent into the abyss must be attributed in large measure to a multi-generational failure by those many teachers who either did not know, or did not distinguish between the various categories of persons designated a "Jew" in the New Testament.

In addition, the work challenges the concept of Immortal Souls, soul destinations called Heaven and Hell, and re-contextualises many other teachings and concepts such as Sin, Salvation, Atonement, Faith, Works, Justification and Grace.