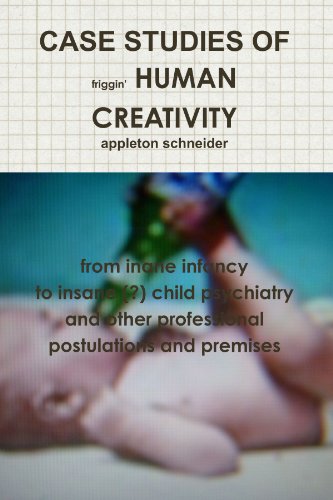 about this book: Creativity is kind of like insanity. But it functions -- at least to entertain, if not to actually advance existence.

Infant Judy, conceived by a woman whose tubes had been severed, not just tied, and whose husband's vasectomy resulted in nonexistent sperm count!!

Infant Judy spit-up at bugs which she then tried to eat. Little Judy began swallowing her arms up to elbows and far worse.

Little Judy making Jello with the Lavoris and putting laxative in the communion cups, the antique china in the washing machine, moving the construction detour cones to direct heavy traffic ten miles down a narrow country road that dead-ended at a pig farm.

Older Judy tying her naked doll to the rotisserie while "King Ken" watched and when mommy came running to shut off the flame Judy explained, "I'm just having a Barbie-q".

And the professionals (school administrators, pediatrician, especially child psychiatrist) are just as off-the-wall as Judy.

Far beyond fun and frivolity, this book presents a perspective on even the disruptive and demented as the potential for demonstration of true creativity. To assure that childhood potentials are fulfilled, schools should teach kids about kids, about parenting. The final section of the book "lectures" (via characters of the story) on this important, and serious, subject matter.

Otherwise, CASE STUDIES . . is a hoot of a read.

Other books by Appleton Schneider (more)