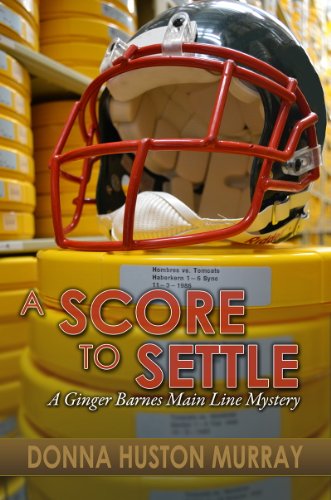 about this book: The murder of a professional quarterback summons Ginger Barnes to Norfolk, Virginia, to calm her pregnant cousin's not-so-irrational fears. If Gin doesn't steer the police in the right direction asap, Michelle's husband might be accused of the crime, ruining his football career, further distressing the at-risk mother-to-be, and thereby endangering the child. Gin, whose father was a coach, knows a thing or two about football, fortunately, because some clues are hidden in the play by play of a game. Not a fan? Not to worry; Gin will explain. Plus there's a pivotal baby shower in there to assure you this mystery is still a "cozy."

The plot idea occurred to me when I attended a "roast" for a well-loved high-school football coach. Not one but two presenters assumed I hadn't gotten their jokes but said they hoped I had a good time anyway. Since I had laughed along with everybody else, I thought it would be fun for Ginger Barnes to possess unsuspected knowledge, too, knowledge she would then use to solve a murder. I'm not as smart as Gin, but I do have resources. Aside from being a head-of-school, my husband both coaches and broadcasts football.

Other books by Donna Huston Murray

Video: Donna Huston Murray talks about why it's so much fun to write mysteries. A SCORE TO SETTLE featured.