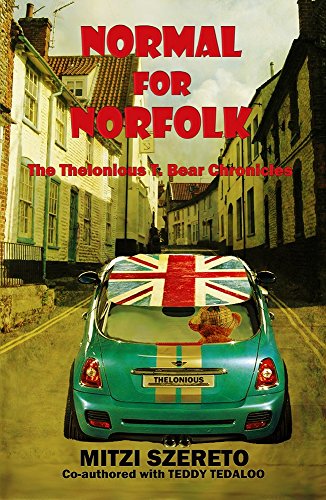 about this book: Normal for Norfolk (The Thelonious T. Bear Chronicles) is a quirky crime novel/cozy mystery penned by Mitzi Szereto and co-authored by her celebrity sidekick bear, Teddy Tedaloo.

It's the first in a new series about a photojournalist bear by the name of Thelonious T. Bear. In this debut novel, Thelonious leaves London to take an assignment in the Norfolk countryside, hoping to find the real England and perhaps start a new life for himself. Things don't turn out quite as he expected, however. Rather than the pastoral setting he imagined, he lands in the midst of a series of murders of local village publicans. As if that isn't bad enough, the bumbling detective chief inspector assigned to the case has Thelonious in his sights as the sole suspect in the crimes!

Normal for Norfolk's ursine protagonist Thelonious isn't like most bears. For one thing, he drives a Mini Cooper with a Union Jack on the roof. For another, he wears a deerstalker hat and cologne, loves the music of Charlie Parker, and is not one to suffer fools gladly. Being a diminutively statured bear living in human society is difficult enough, but being a murder suspect definitely pushes things way over the top.

Norfolk is known to be one of England's more quirky counties. It's full of colorful characters and we created plenty of them for our book. We've got a detective chief inspector so annoying and inept that it's a wonder any crimes ever get solved. We've got a tobacco-cured old rock guitarist who downs whiskies at breakneck speed in contest with an ancient old granny. We've got a B&B landlady who has a bit of a yen for Thelonious. We've got a celebrity TV chef who wants to take over every pub in Norfolk. We've even got a couple of thugs from London's East End - a pair of rough geezers who fancy themselves the 21st Century version of the Kray brothers. Throw in a dead pheasant, a beekeeper, a grumpy vicar, an obnoxious Audi driver and a flatulent old dachshund named Lord Nelson and it's all go from there!

So grab yourself a pint and join us on Thelonious T. Bear's (mis)adventures in the quirky land of Norfolk, England!

Here's what some reviewers have said about the book:

• "For anyone who's ever wondered what Paddington at Large would have been like if it had been written by Raymond Chandler — and who hasn't? — Mitzi Szereto has the answer. Like Philip Marlowe, Szereto's Thelonious T. Bear is a modern knight errant who plays it cool even as the light of suspicion shines on him. And like Paddington, he's short of stature and long on charm. If you like your sleuths tough, cynical and cute as a button, Normal for Norfolk is the book for you."
— Steve Hockensmith, author of Holmes on the Range and Pride and Prejudice and Zombies: Dawn of the Dreadfuls

• "Normal for Norfolk has it all: magic, gritty realism, humor, cultural commentary, intelligence, charm, and suspense. The hero of this novel, Thelonious T. Bear, finds himself at the heart of a mystery. He's a photojournalist like no other, a pub-loving, anthropomorphized bear who wears cologne and a deerstalker hat. I am eager to read the next book in Mitzi Szereto's series."
— Janice Eidus, author of The War of the Rosens and The Last Jewish Virgin