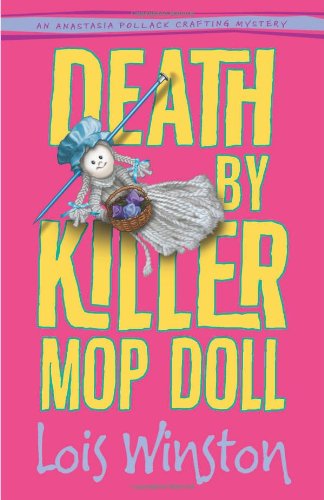 about this book: Reluctant amateur sleuth Anastasia Pollack is dealing with overdue bills and a household that includes two teenagers, a demon dog, an entitled cat, a Shakespeare quoting parrot, and her Russian princess mother sharing a bedroom with her misanthropic Communist mother-in-law.

What she doesn't need is an unpaid gig on a revamped morning TV show, but that's just what her well-intentioned mother gets her and her fellow editors involved in when Mama returns from a cruise engaged to the show's producer. However when the producer turns up dead, stabbed in the heart with one of Anastasia's knitting needles, Anastasia is thrust into the middle of another murder investigation that could result in her and Mama becoming the killer's next victims.

• "Anastasia is a crafting Stephanie Plum, surrounded by characters sure to bring chuckles as she careens through the narrative, crossing paths with the detectives assigned to the case and snooping around to solve it." – Booklist