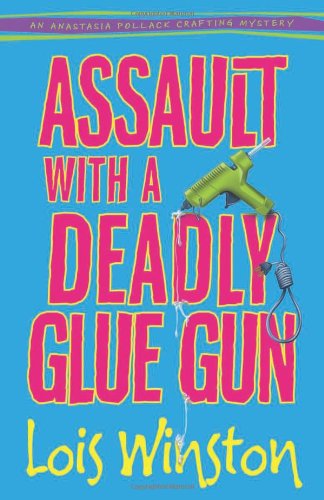 Book: Assault with a Deadly Glue Gun by Lois Winston

about this book: Anastasia Pollack is living the American dream – loving husband, two kids, house in the suburbs, good job – until the day Loving Husband morphs into Dead Louse of a Spouse. That's when she learns her entire marriage has been built on lies. She's left with no money in the bank and a mountain of debt, thanks to her husband's deceit and secret gambling addiction. He also leaves her saddled with his misanthropic Communist mother and his loan shark who is demanding Anastasia pay him the $50,000 he's owed. Or else.

Anastasia returns to her job as crafts editor at a women's magazine to discover the dead body of the fashion editor glued to her office chair. When evidence surfaces of an affair between the editor and Anastasia's husband, Anastasia becomes a reluctant amateur sleuth to clear her name before the real killer puts a permanent end to her investigation.

Assault With a Deadly Glue Gun is the first book in the Anastasia Pollack Crafting Mysteries series.