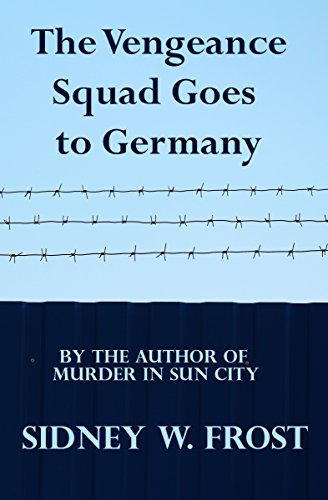 about this book: The Vengeance Squad Goes to Germany—Insiders Description

This is the third book in a series about an unlikely group who have a knack for righting wrongs.

In the first book, Chris's fiancé is murdered during a robbery. What this young computer science professor goes through parallels my own feelings after I lost my wife to pancreatic cancer. In the second book, I sent Chris and the squad to England searching for the person who had conned Liz, a squad member, out of $140,000 she had earmarked for a new bookmobile. Although there was some tragedy, book 2 was a bit more fun—for the squad and the readers.

In this, the third, book the squad travels to Germany in search of Chris's wife, Angela. The problem for the squad could have been just about anything. I picked Angela's kidnapping to get her out of the way so the squad, all amateur sleuths, could solve the crime. Angela is an MI-6 agent who was in Germany looking into the refugee problems there. She'd told Chris never to go looking for her if she disappeared. But, of course, he did.

Writing the third book in a series is easier than writing the first, or even the second, book. Why? Because I know the characters. I understand that you might not read the books in chronological order, so I describe the characters in each book. All my characters have unique quirks, for want of a better word. I keep a list and periodically search the manuscript to make sure I mention the quirks every so often.

For example, Chris is OCD with an eidetic memory, computer skills, and a beard. Liz is a hugger, known for her friendliness and concern for others. Tex is in a wheelchair, wears a Stetson, loves costumes, and is an actor.

I love to travel and have been to Germany nine times. I always send my characters to a place I've been. It saves on research. While I'm writing, I use Google maps to remind me of the area. While I was writing the England book, I got the idea to use a red double-decker bookmobile while poking around with Google images.

Now that I've managed to talk about everything but what this book is about, here's a brief description to encourage you to read it.

Chris is married to Angela and they live on a farm near Bath England. Tex has finished school and is an Alcohol/Drug counselor in Austin, Texas. Liz is married and is living on a farm in Georgetown, Texas. Angela is being held captive in an abandoned airport in Berlin.

Angela is late getting home, and her bosses won't tell Chris why. He calls Liz and Tex and asks them for help. He doesn't tell them why. They meet at Chris's place and head for Germany by train. You'll have to read the book to find out how they knew where to start looking. They use their computer skills and financial help from backers who have helped previously. The bookmobile for this book is made especially for them during their travel from England to Germany. It is half real bookmobile and half computer control lab.