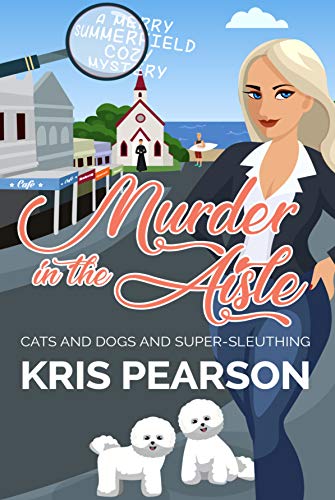 about this book: Different for me! This is the first of my Merry Summerfield cozy mysteries - although it might not be endless cupcakes and kittens like some of them are.

Merry Summerfield is a freelance book editor, so she can arrange her own hours of work. This gives her time to get herself into lots of trouble. Merry might be just past forty but she's still a red-blooded woman! When she crosses the road to investigate the very nice pair of legs belonging to the painter in a shady hat, she's astounded to find they belong to Vicar Paul McCreagh - someone she's known only vaguely for the past couple of years. Paul is painting the church fence, because, to be honest, he doesn't have quite enough to do in the small village of Drizzle Bay. He's also in charge of two other churches - tiny country ones. When he realizes it's been quite a while since his flower arranger went into the church he mentions this to Merry, and together they enter Saint Agatha's to make sure she's all right. She's not. She's lying dead in the aisle, surrounded by flowers.

Thus begins a cheerful chase which involves plenty of the local characters, a pet-sitting job for Merry in an isolated seaside cottage, two little white Bichon dogs (lots of bark but no bite) and a hidden office with alarming files which seem to implicate the American owners of the local bar and cafe in Black Ops assassination jobs. There's also Lord Drizzle - the down-to-earth old farmer who travels to England periodically to vote in the House of Lords.

There are plenty of twists and turns to keep you guessing, a wee bit of romance, two handsome heroes, and a lot of laughs.

This is the first in a series. The second is Xmas Marks the Spot. The third will be Dead and Disorderly.