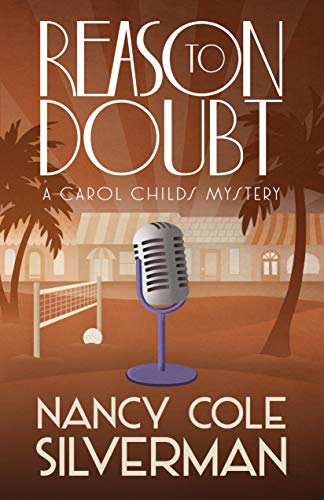 about this book: The balancing act between Carol's private life and her job as an investigative reporter was never tougher then when Carol's college bound daughter returns home for college with a boyfriend in tow. Carol's not wild about the boy, a photographer who freelances photo shoots up and down California's coastline. A suspicious occupation for one so young - particularly when the police are on the lookout for a photographer who they believe has been setting up models for remote shoots and then killing them.

Five star reviews say REASON TO DOUBT is a book soft-boiled mystery lovers will want to read. Fast paced and engaging. A story with a ripped from the headlines feel. My Kindle pages were flying.

Silverman says, "This story hit a little too close to home when I woke up one morning and heard helicopters above our house and later went to work to learn a young model's body had been found in the hills behind our home. Adding to the excitement, later that day my sister called to say the police were talking to her photographer husband, as they were a lot of young photographers in the city. Of course, it wasn't my brother in law, but years later, when I was looking around for plots for my next Carol Childs mystery, I couldn't help but wonder...what if?"