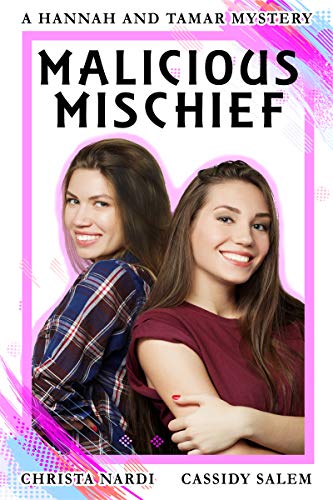 about this book: Social media, a secret society, and smoke bombs have Hannah and Tamar searching for clues to the people behind it all. Only in the process, Tamar ends up the victim of cyberbullying and the sisters discover malicious mischief. It gets even more serious when a smoke bomb results in a death. They also make new friends, including a new volunteer for the animal shelter. #Mystery intended for teens, #YA and the young at heart. Clean read.

This book in the Hannah and Tamar Mystery series deals with some current issues facing teens and their parents. In particular, Hannah's asked to look into what's going on when a student is the victim of cyberbullying. This is a significant problem and one parents didn't have to deal with as they were growing up. The ways in which social media have compounded other social pressures are still being figured out. In addition to cyberbullying, the pull and the perils of secret societies and sometimes not so silly things required of potential members also figures prominently in the story. Resources for dealing with cyberbullying are provided in the authors' notes at the end.

Other books by Christa Nardi (more)