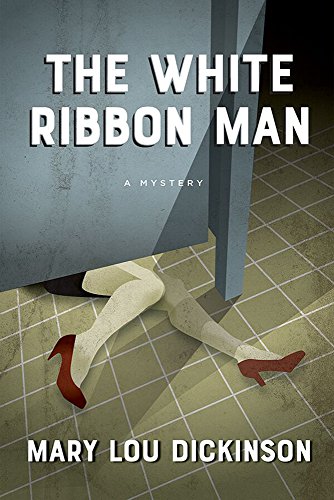 about this book: There are no clues at the scene as to the victim's identity so the initial puzzle is to discover who she is…

It was a colleague who also wrote fiction who suggested I write a mystery about a body that is found in the basement washroom of a downtown church in Toronto. He was going to help with the writing, but at our first meeting he challenged me to do it myself and to credit him with the idea if I did.

There I was, mid-air without a parachute. That is the beginning of the story of this book. I wasn't even much of a mystery reader until then. So I sought suggestions from my friends who were. And soon I began to see that I would have to learn a lot to write in this genre.

And so the idea for THE WHITE RIBBON MAN, a mystery, was born. This mystery was preceded by three other books, all in the area of literary fiction. So it was an incredible challenge to write in the mystery genre. I interviewed police officers, a minister in the Anglican (Episcopalian) church and read numerous mysteries in the process. I had also worked on a crisis line for many years where I heard about every form of crisis and had frequent contact with police services. While this was not research in the traditional sense, it nonetheless informed my work when I wrote THE WHITE RIBBON MAN.

The downtown church of the story is tucked in behind a large commercial mall, the Eaton Centre. This church is the setting for the book. If any readers were around in Toronto when that mall was built you know that the developer intended to demolish the church, but there was an outcry that led to its preservation.

It is a church with an interesting earlier history as well. It was built with a bequest from an anonymous donor who stipulated that all the seats be free so as to attract anyone to it, no matter their station in life. The church remains a place for anyone to come freely, a contrast in modern times to the commercial focus of the Eaton Centre next door. In this book, that spiritual community (fictional, of course) is disrupted when a woman's body is discovered in a basement washroom.

I would like you to meet some of the people who appear in this mystery.

-Detective Sergeant Jack Cosser is the police officer in charge of the investigation. A few pages in, the reader has met some of the people present at the Sunday service that day. At that point, Cosser doesn't know any more than the reader does or than you do. There is a body. The location of the body is in a church. He has not been inside this church before. Many readers probably have not either. The setting is in Toronto, a large multicultural city in Canada that is known widely across North America. Many in Toronto know the church whether they have been inside or not.

-Ardith is a well-educated advocate for removing barriers to the disabled. A woman with cerebral palsy, she also needs a wheelchair. She is often misunderstood or not listened to because of assumptions around her difficulty speaking,
-Patsy, a financial adviser, has risen in the ranks of a bank who nonetheless continues to experience oppression both because of her gender and her race.

-Rosemary is a librarian who fancies herself a writer, but has never done anything about it.

-There is the victim of the crime (ID to be established).

-The minister, David, is a rather strange duck in some ways you will discover.

-There is the caretaker, Brent, an observer of the people who attend services.

-There are others you will meet as well.

Blurbs on the back cover of the book include:

Mary Lou Dickinson deftly takes us into the world of a social justice community and their struggles to cope in the aftermath of violence. (Farzana Doctor. Author of All Inclusive & Six Metres of Pavement)

An insightful literary mystery. (Lisa de Nikolits. Author of No Fury Like That & The Nearly Girl)

A well-imagined story of how a horrible crime not only upends lives, but the trust of a community. This is a book that will leave you thinking. (Ken Murray. Author of Eulogy)

Bio:
My books (all published by Inanna Publications, Toronto) include a collection of short fiction, One Day It Happens (2007), and two novels, Ile d'Or (2010) and Would I Lie To You? (2014). The White Ribbon Man (2018) is my first mystery. I grew up in northern Quebec and now live in Toronto.