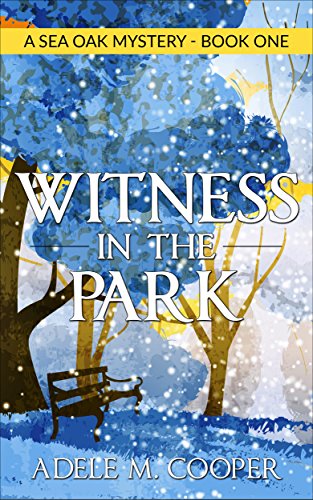 Book: Witness in the Park (A Sea Oak Mystery - Book One) by Adele M Cooper

about this book: A new Cozy Mystery from Adele M. Cooper!

This is the first book in the Sea Oak Mystery series.

"Later, much later, when April Longmont stood at the lonely grave of her former classmate, Jerry Barton, she regretted that he had not been a friend, only an acquaintance. That was partly her fault, she thought. The red and white carnations in the white vase April sent were the only flowers to mark the grave. Private Detective, Clay Augustine, who was also a fellow classmate, stood with her as the casket was lowered into the ground. There were no other visitors to the grave. Not even the lady that Jerry said – more in hope than in truth – he was dating.

Barton had been a loner in life, only partly by choice. He was a geek. The number of his friends could be counted on one hand. He was uncomfortable in crowds and was the antithesis to the "party animals" some other classmates had been. He was also a man who had bad luck. It was as if Fate wanted to destroy Barton or at least give him an exceedingly hard life. It never did him any favors. Not even in death. His grave was in a rundown part of the Forest Palm Cemetery. Other graves had manicured green grass covering them. A few brown weeds sprouted on Barton's grave.

April squeezed Clay's hand. She wondered what the odds were that their two lives would be intertwined with Barton's during the final week of his life."

Join April and Clay on their journey as they seek justice for their friend...and who knows, there might be just a spark of romance!