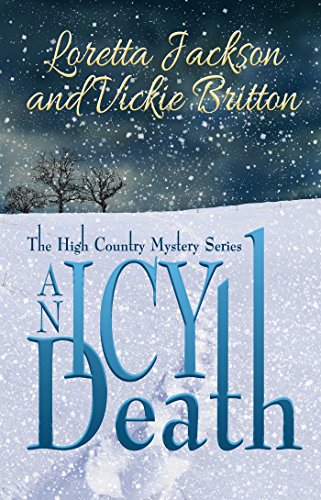 about this book: It's cold enough to freeze to death in Wyoming. This fact makes An Icy Death the only book we have ever written inspired by the weather. In our time spent in Wyoming, my sister and I heard stories of people getting lost while hunting or stalled in cars and dying of hypothermia during the winter months. With temperatures often with a wind chill factor of thirty below zero, freezing to death is a real danger. Because many places still exist where cell phones cease to work and help is almost impossible to summon, blizzards and sudden whiteouts are extremely hazardous.

In An Icy Death Sheriff Jeff McQuede must solve a mystery while battling the elements. He discovers a stalled car on an isolated road far up in the mountains, one that has been closed. Within the car he finds the frozen body of a middle-aged woman, Margaret Burnell. The medication, her taped ankle, and footprints in the snow leading away from the car tell the rest of the story--about how she must have died of hypothermia while her husband went for help.

Until McQuede discovers that there are enough drugs in her system to cause an overdose, and her death may not have been an accident. It's McQuede's job to find out what really happened that snowy night so far from town. Either a relentless killer tracked and sabotaged the Burnells in the heart of a blizzard, or, more likely, Arthur simply abandoned his wife for his share of her vast inheritance. In any event, Margaret Burnell had been set up to die an icy death.

In the High County Mystery Series you encounter our sheriff--everyone counts on good, loveable Jeff McQuede to be strong and dependable all of the time, yet in reality, he's often vulnerable and always human--in particular where Loris Conner, the woman he loves, is concerned. Our stories center around a small community and what we hope to bring our readers is a solid, plot-based story centered around a modern-day sheriff with old-time values.