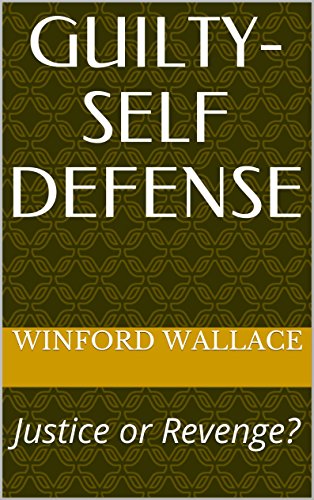 about this book: The title, "Guilty-Self Defense" denotes opposites. Hopefully, when prospective readers see the title, their interest will be piqued and they will read reviews and introductory chapters.

Guilty-Self Defense, a courtroom drama/suspense novel, conveys the adult reader to the rural south in the mid-fifties.

Nothing ever happens in the sleepy cotton town of Colette, Arkansas, until a sequence of events triggers the homicide of a city marshal/constable. An easy conviction looms for Hank Carter, the toughest prosecutor in the state, on his way to becoming the Democrat candidate for governor. All that stands between Hank and a quick guilty verdict is a hasty defense provided by an inexperienced attorney. Marcus Wilson spends his time writing wills and researching titles. The defendant confessed to the crime and has a history of violence. The man holds a grudge against the marshal, and is from out of state. Why . . . is the jury hanging on every word this upstart attorney spouts in defense of an obvious murderer?

An event that occurred over 60 years ago provided the catalyst to pen a novel loosely based on an episode that dwelt in the recesses of my mind. With encouragement from a close relative I created a story based on preconceived notions of justice, or revenge, love won and lost and the influence of one man to control potential witnesses. Regional culture, love, hate, patriotism, misunderstanding and suspense are woven into a tale that keeps the reader wondering right up to a surprising climax.

Including research, countless hours spent interviewing persons knowledgeable of the workings of the law and courtroom proceedings, as well as countless edits, I worked on the manuscript, off and on for two years.

Having grown up in the rural south, I am intricately familiar with the dialect, customs and traditions of the region.

• The author builds suspense and interest in a tale where the majority of the story takes place in a courtroom. Wallace's technique has the reader hanging on every word as he creates a believable love story, interweaving the complexity of misunderstanding between lawyer Marcus (Marc) Wilson and the love of his life, Molly Harris.
— Beth Shumway Moore, published writer

• Wallace's novel Guilty: Self Defense is like opening a time capsule to a chapter of history, with rich details about a 1950s murder mystery in Collette, Arkansas. Nothing comes easy to our main character Marcus Wilson. He has much to learn about the law and love in this subtle blend of family, patriotism and social issues.
— Vince and Julie Dasal

• I cringed when Marcus Wilson (defense attorney) was blindsided in court after the love of his life passed on information, crippling his defense. Wallace has a gift for creating authentic dialogue that adds to the believability of this story.
— Marilyn Richardson; published author