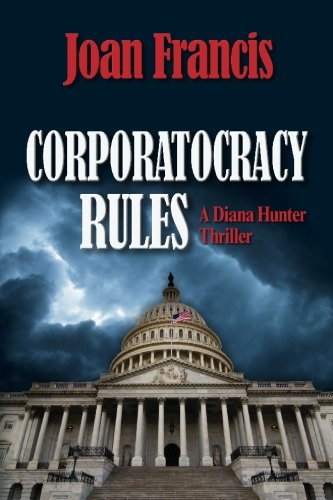 about this book: When private investigator, Diana Hunter goes undercover as a homeless woman in downtown Los Angeles she stumbles onto a conspiracy that was never supposed to be part of this assignment. As she follows the crimes, they lead her up the social ladder, from well established scam artist, Dorica June Grizel, to corrupt Senator George B. Simpson, to international Bankhaus von Kleimur. There she and her ad hoc partner Nelson Langly, are stopped cold. Beyond there is the power of the Corporatocracy: large international corporations and financial institutions and the political leaders indebted to them. When a case goes this far there is no civil or criminal remedy because the Corporatocracy make the rules. Unwilling to let it die there, Diana devises a solution that is not exactly legal and is very likely to get both her and Nelson killed.

Joan Francis. Francis Pacific Investigations
During the last great banking failure in the mid 1980s, I was part of a detail that provided security for the Federal Savings and Loan Insurance Corporation, (FSLIC). We would fly to the location of a failed S&L, shut it down, and provide security from Friday night though Monday morning. Of course, by the time we got there the place had already been robbed, usually by it's owners. On Monday the S&L would reopen under a new name. The old owners were let off free, FSLIC used member premiums to pay off insured accounts, and the new owners took over with no liabilities. When FSLIC went broke, the FDIC stepped in for short a while. Then congress decided to have the tax payers take over. Total cost was over 500 billion dollars. This was not do to the economy or the interest rates as widely reported. It was due to deregulation of the S&Ls which resulted in unchecked abuse and fraud. But hey, it was the free enterprise Reagan and friends wanted. I was furious, but helpless to do anything. When I saw the whole thing starting over with deregulated banks, Wall street and securitized mortgage loans, I still felt helpless, but had to do something. So, I turned it over to Diana Hunter and the result is Corporatocracy Rules. If you are unfamiliar with the term Corporatocracy, check it out on the Internet and while your at it, check out the term fascism.