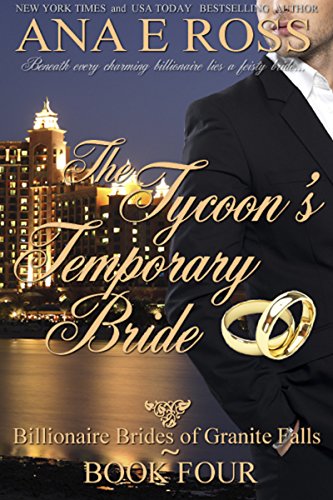 about this book: Since he was left standing at the altar several years ago, Adam Andreas, a.k.a. the Temporary Tycoon, has been a bit bride-shy. This handsome, sexy CEO of Andreas International is quite content with his temporary relationships, until the day he literally bumps into Tashi Holland. One look into Tashi's frightened, emerald eyes and Adam's old and discarded need to rescue damsels in distress hits him full in the gut. No way is he falling into that trap again.

Tashi Holland is running from a man whose identity she doesn't know and looking for one who's just as mysterious. Following the instructions of the FBI agent who rescued her from a New York human-trafficking Kingpin, Tashi arrives in Granite Falls, New Hampshire—the safe haven the agent has sent her to. But with only the first name initial of the man who's to protect her, Tashi feels lost, scared, and vulnerable as she tries to start a new life in a strange town.

She has no idea whom to trust, so when she bumps into a man in a diner, and finds herself securely locked in his arms, it is only natural that she panics and runs. When fate cast them together again, Tashi begins to trust Adam, and eventually tells him about New York City and the FBI agent who died to save her.

Adam offers Tashi protection as his temporary bride. Will she accept, or refuse in order to protect him from suffering the same fate at the FBI agent who died to save her?