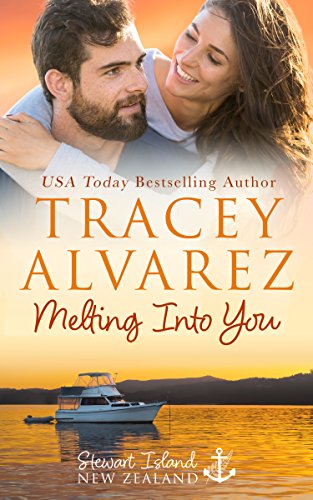 Book: Melting Into You (Due South Book 2) by Tracey Alvarez

about this book: Melting Into You is the second book in the Due South series, set on a remote New Zealand island called Stewart Island. It features the heroine from book one's older, crankier brother, Ben, who's thrust into instant fatherhood when his eight-year-old daughter is left with him for the school holidays. It's a hell of a surprise to this staunch bachelor who never even knew he had a kid. It also complicates his planned seduction of Stewart Island's feisty Italian schoolteacher, Kezia Murphy.

While writing book one in the series, I knew Ben would be the hero of book two, but I hadn't figured out exactly what his story would be. Then I asked myself what would be the absolute worst thing that could happen to this grumpy, fiercely private man. Voila – he became an insta-daddy. And pairing him with an over-protective, sexy widow with a daughter of her own was the perfect revenge.

Like the first book in the series, Melting Into You is very much a spicy romance, but community and family play a huge part. Plus fans of the series get to see glimpses of old characters, plus introduced to upcoming heroes and heroines.