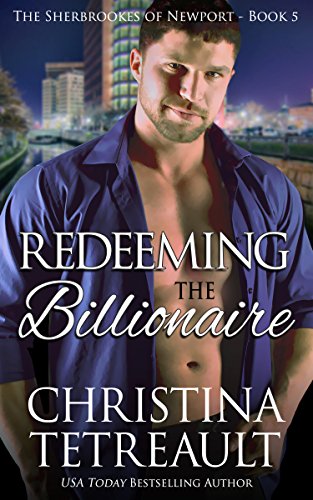 Book: Redeeming The Billionaire (The Sherbrookes of Newport Book 5) by Christina Tetreault

about this book: Readers that love sexy billionaires and powerful families will love book 5 in The Sherbrookes of Newport series. In Redeeming The Billionaire readers meet another family member Trent Sherbrooke, President Sherbrooke's nephew. Trent Sherbrooke works hard and plays harder. He's never once cared what the media or society says about him, until now. Intent on making his way into the United States Senate, Trent hires campaign advisor Marty Phillips, a ruthless force in politics who will stop at nothing to get his candidate elected. According to Marty Trent needs to clean up his reputation and the best way to do that is get married. After a chance encounter throws local small business owner Addison Raimono in Trent's path, Marty believes he's found Trent bride and ticket into Washington.

Ignoring his conscience that insists he leave Addison alone, Trent sets out to win her over. Soon what he assumed would be a relationship to salvage his reputation turns into so much more. But can a relationship that began as a lie ever survive?