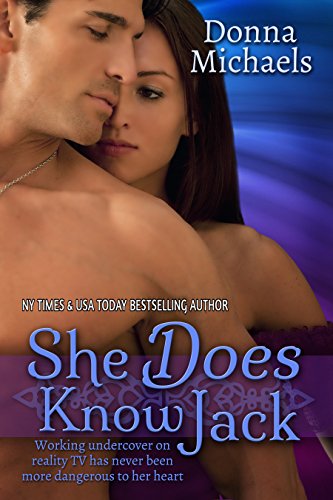 Book: She Does Know Jack by Donna Michaels

about this book: What if?

What if one of the contestants on The Bachelor reality TV show was undercover? What if she was there to protect the bachelor from threats coming from inside? What if the bachelor's brother headed security and didn't know the real reason she was on the show?

SHE DOES KNOW JACK is a unique take on reality TV. Originally released through The Wild Rose Press as Meet Your Mate, this book has been revamped with the heat level and word count upped to allow me to play 'what if' and I had a ball! I didn't want to go the obvious route and have the undercover contestant fall for the bachelor. No. It had to be his brother who wanted nothing to do with the show, but was there to protect his brother. But that wasn't enough for me. So I had his parents ask an old friend for help and told him they didn't want their older son to know the 'contestant' was an operative because Jack would feel obligated to protect the girl, and because he wouldn't have access to the bachelorette mansion he'd insist she leave. But that still wasn't enough for me. lol The 'what ifs' continued. What if she and Jack had met and had a tryst in the past? Yes, now we were talking. Let the fun begin!

Former Army Ranger Jack 'Dodger' Anderson would rather run naked through a minefield in the Afghan dessert than be on the set of his brother's reality show, but his foolish brother won't leave and has been receiving threats from one of the contestants. Threats continue to arise, cameras and videos continue to break down, and it doesn't help to find himself attracted to the new, vaguely familiar contestant.

Security specialist, Brielle Chapman hates investigating reality TV. Having nearly failed on a similar assignment, she's less than enthusiastic about the new one, but still determined to help her uncle and his company out. Until she discovers the bachelor's brother is the hot, one-night-stand she had after a prior undercover assignment. Hopeful the fake accent, red wig and blue contacts she'd donned for the other case, coupled with a few added pounds, okay, ten pounds, she'd gained ten pounds since their 'dressing-room' hook-up last year, so she feels her identity is safe from the sexy former Ranger. But not her heart. Secrets are revealed. Lies are revealed. Trusts are broken. Hearts are broken. The culprit is revealed. It all comes out in the open on live TV.

• "This author knows what her fans want to read and she never fails on delivering just that. This is another wonderful example of how Ms. Michaels creates a storyline that's fun, sexy, entertaining and oh so hot and rolls it up into one nice package for her readers to devour."
— Diana, Night Owl Reviews, 5 out of 5 Star REVIEWER TOP PICK

Thanks for reading,
~Donna

Other books by Donna Michaels