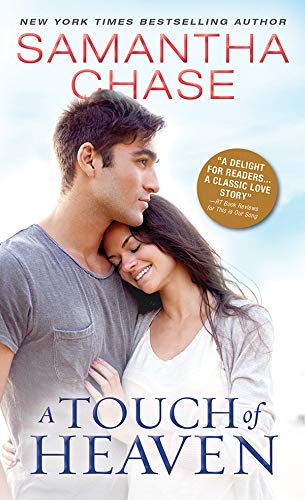 Book: A Touch of Heaven by Samantha Chase

about this book: In a perfect world, Regan Amerson would have a successful business, a man to love her and be living in her beloved family home.

One out of three wasn't bad, was it?

Independent day spa owner, daughter to a rebellious mother, no romantic entanglements in sight and being forced to sell her family home was a more accurate description and Regan would like nothing more than to change it. Coming to grips with the hardest one - selling the family home - is devastating for both Regan and her mom. When her mother wins a home makeover from a reality home improvement show, Regan is furious. Not only is she losing the home that she loves, but some lame reality TV show host wants to rip it apart first? Not if Regan has anything to say about it.

Turning home makeovers into some sort of TV drama is not what Sawyer Bennett signed on for. When his father and producer both present him with this new angle for his show, "The Bennett Project", Sawyer is not on board. Especially when he meets the first "recipients" of this new angle - Regan Amerson and her mother. Sawyer was prepared to turn the project down until he met Regan but once he met her he knew that he had to do everything in his power to not only win her over where the home improvement project was concerned but on a personal level, too. He's willing to defy his father, his producer and the network in an attempt to win the heart of the woman who has quickly come to mean more to him than any amount of fame.

But by the time the renovations are done, how much of their personal lives are revealed to the reality television viewing public and how much they were able to keep private becomes their biggest issue because the cameras were always rolling...

Other books by Samantha Chase (more)