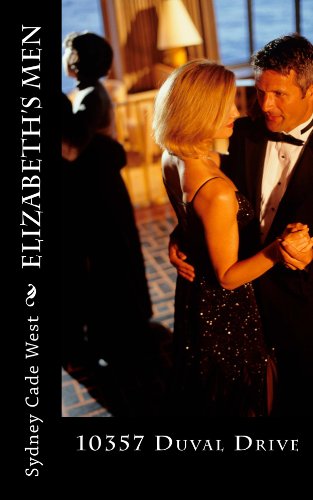 about this book: Writing 'Elizabeth's Men' was a challenge; not in the usual sense of order, formatting, and background research. It was a new genre; Contemporary Romance . . . on steroids. And it also included subject matter that would at least settle in the unorthodox column and maybe even raise a few eyebrows. Fortunately, the steamy book seems to be gaining steam and the raised eyebrows seem to be saying Ah! 'bout time!

I wrote this book expressly for women who have had enough, probably on a dozen different levels; women who would like to see the tables turned for a change, not on a societal level necessarily but on an individual level, woman by woman by woman. What behavior will you accept from men? Where do you draw the line? When do you get to make the deals and arrange the arrangements? And what if the one thing you never wanted really does in the end become the only thing worth having? This book certainly sets the stage for such adventures but in ways that might surprise you and with a cast of characters that you will likely not forget.

Elizabeth's Men: The day 17-year-old Elizabeth Hyland boards a bus for Jemison, Kansas, she hates men with a passion and with good reason. She has just seen in living color what her no-good brother-in-law has done to her sister, Annie, and after Liz sends him packing on the business end of a 12 gauge shotgun, she drives her daddy's truck home, pulls her readied suitcase from beneath her single bed, and says goodbye to her family. She doesn't tell anybody what happened at the Fair.

Wayne Redding turns pale and then paler when Liz pauses in the hallway where he stands trying to explain himself to a sobbing Annie. Telling her sister a big lie, no doubt, but it's a done deal. The word is out on him and most of the men in town, and it will quickly go from bad to worse. Liz has seen enough. She isn't staying around for the fallout from the sordid mess. She's scheduled to leave that day anyway. She gives Annie and her parents a hug, kisses her nephew, Jeremiah, looks daggers at Wayne, makes a promise to herself that she will fix him but good given enough time and money, and walks out without a backward glance.

Seven years later, 23-year-old Liz is on her way to the crummy little bar on the outskirts of Jemison where she slings drinks for a living. She's trying to wrap up law school and forget everything about Grover, Kansas except her family and the man who taught her to hate. At the same time, she's putting up with her sloppy boss and the foul mouthed regulars at the bar who keep reinforcing her hatred. She can't stand it much longer.

Then a polite stranger walks in, drinks a cold beer, says thanks you, leaves her a nice tip on the table and after he drives away, Elizabeth's life turns on a dime.