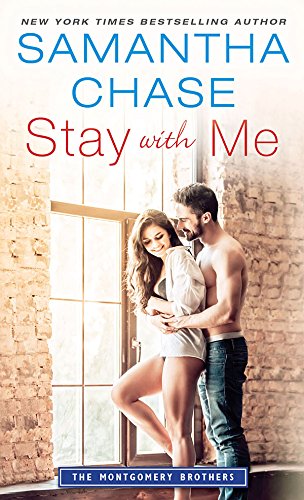 Book: Stay With Me (The Montgomery Brothers) by Samantha Chase

about this book: Mackenzie Montgomery was certain of two things: one, he did not enjoy having his life disrupted and two, it was his turn to have his father disrupt his life.

After two years of watching his father play matchmaker to his brothers and their wives, Mac knew that his number was up. He had no interest in being set up with anyone, let alone get married and settle down. Mac was all set to line up his defenses only to find out that his father had no intention of setting him up with anyone.

The one woman that Mac couldn't stop thinking about and who he most certainly wouldn't mind being set up with.

Gina has always harbored a crush on Mac but after not seeing one another for over twelve years, she's not sure what to expect when she sees him again. The only reason she's returned to North Carolina is to take care of her ailing father. The timing is completely off to be thinking about a fling with anyone, especially someone like Mac. But that doesn't stop Gina from moving forward and seeing if this time around if the attraction is mutual.

All either of them want is to have control over their own lives but once they embark on an affair, control is the last thing that's involved.

"Stay With Me" is book three in the Montgomery Brothers trilogy.

Other books by Samantha Chase (more)