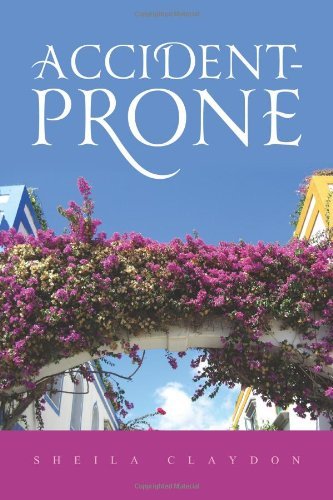 about this book: Matt Anderson has a problem. He's sunk all his money into a derelict hotel high up in the mountains. He knows it has potential but if it doesn't open in time for Christmas visitors then it might not open at all.

Interior designer Alex Moyer has a different problem. She is recovering from a broken love affair and after a miserable and wet winter in London she can't wait to work in Tenerife. That's until she meets her new boss. Why is he so moody and serious? Is it because of his dead wife or is there something more? She only begins to find out why when he has to rescue her time and again from all the scrapes she manages to get herself into.

Why is Accident-Prone set in Tenerife and where did the idea for the story come from? Well a few years ago I spent some time there, in the real small town that I have fictionalized in the book. It is just as I describe it and the story behind the Hotel Alcaszar is loosely based on fact. There was a hotel that had once seen better times and which was now locked and forgotten, except that the real one was in a different place, not up in the beautiful mountains away from the usual tourist sites.

I visited again, very recently. Although little had changed in the eight years since my last visit, the strangest thing happened. Quite unexpectly I met the man who first prompted the character of the hero Matt Anderson, the owner and developer of the Hotel Alcaszar. The man I met is nothing like him of course, not even close. It was just his job as a property developer that made me begin to weave the story - and that's how it happens with writing, a small trigger and I'm off looking for characters and settings.

There was one other thing. As I climbed up through the steep thoroughfares, using the steps my hero and heroine used in the story, or sat at a table in an outdoor restaurant in one of the shady squares where they sometimes ate, I kept expecting to bump into them. Alex and Matt. How wonderful if would have been to be able to meet them. I even wondered if I would see Cristina chivying the twins along in front of her, or Conchita hurrying to work. I didn't look for Francesco though. I don't want to meet him ever again.